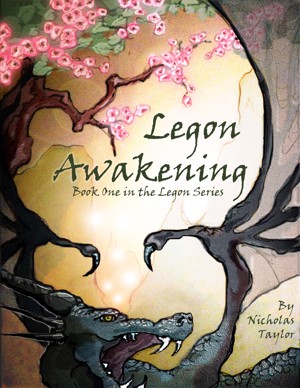 Legon Awakening: Book One in the Legon Series

By Nicholas Taylor
Rated 4.60/5 based on 10 reviews
Legon is a simple young man in the small town of Salmont, a town in the center of the Empire that few know about and even fewer care about. All he wishes to do is to start his own butcher shop and take care of his adopted sister and family. Legon is not from Salmont and echoes from his parents past are coming up to haunt him. More
Set in a world that is not our own, Legon Awakening takes you through an epic journey into a land full of wonderment, illusion, and innovation.

Legon is a simple young man in the small town of Salmont, a town in the center of the Empire that few know about and even fewer care about. All he wishes to do is to start his own butcher shop and take care of his adopted sister and family. Legon is not from Salmont and echoes from his parents past are coming up to haunt him. Legon finds himself being caught in the war that claimed his biological parents lives and now threatens everything he has. He must flee from everything he knows and journey to land of his ancestors to keep all that he loves safe.
Download: epub mobi (Kindle) pdf more Online Reader
rtf lrf pdb txt
Price: Free! USD
Add to Library
Create Widget
Tags: adventure action fantasy magic epic epic fantasy epic fantasy series elf elves dragon adventure action fantasy adult fantasy book magic book fantasy adventure books magic fantasy fantasy epic magic epic
About Nicholas Taylor

Hi, I’m Nick Taylor, I was born and raised in Denver, Colorado, possibly the greatest place on earth. I went to Dakota Ridge High and was in band— that’s right I was a band nerd and no, I don’t have any cool “one time at band camp” stories, so don’t ask.

I started writing in October of 2007. I was driving around with a friend and said “hey, I wonder if I can write a book.” So I thought I’d try and write outline and see what happens. Well, I finished the outline and I couldn’t just stop there. I needed to write chapter one and then that would be it. Do you see where this is going? Anyway, after chapter one was done, I had to finish the first book. But I wanted to get input as I went in order to write a better story. I decided to do a podcast of the first three chapters to see what people thought. After the first podcast, I decided that I wanted to continue to do it and more over, I wanted to get a larger listener base. It's all been a wonderful journey from there. 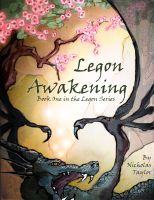 Reviews of Legon Awakening: Book One in the Legon Series by Nicholas Taylor

This was a somewhat interesting read, it was an Eragon type book where the main character is a butcher's son, and has an epileptic sister, Legon also has an awesome friend, and a resourceful mentor. So anyways, this book follows the the hero's journey cliche very well, which is a cliche I like in books. There were some grammar errors, but they were somewhat funny, as there was a person who was eaten, then was totally ok in the next sentence that mentioned them. In the Legon universe dragons are magic users that have ascended, there are evil magical beans called Iumenta that are the elves greatest enemy, and an evil queen rules the known land.
I would recommend the book to people that like the eragon book series, dragons, elves, magic, and/or fantasy adventure

I received this as a free kindle download. This is the story of Legon and his sister Sasha who are forced from their small mountain village into a world of magic and dragons. I would not recommend this to readers with weak stomachs because of the detailed violence. People are not just killed, their demise is medically detailed with amounts of blood and which tendons are involved. It sounded slightly clinical in the details. Like someone who had medical training wrote those parts.
That said, the world is well thought out and the author knows it well. Although I didn't need to know every little detail as sometimes described relating to the mechanics of some of the magic.
The characters' language was a bit too modern. There was too much modern slang in it and made the story sometimes sound foolish. The language was easy to follow but like one reviewer said, why were they "fist bumping" with elves and calling themselves "hot" when they had on nice clothes in a fantasy. It just seemed out of place especially after what some of these characters went through.
For these reasons it was hard to immerse myself in the story of this world. Was this a distant future or a completely new and fantasy world?
I gave it three stars because of the world built and story potential. The characters were funny sometimes but really not individuals. We knew what everyone was thinking and they pretty much sounded all the same. And when there could have been potential for a character to really stand out, it didn't happen.
This is a series and I'm not sure of the outcome. I'm not sure the author knows either. Our hero Legon has no idea what he's destined to do and neither does the reader. Sometimes you have an inkling of where the story will lead, but in this first book of the series I was not made to care enough about Legon to find out his purpose.
Great imagination. Just like Keither there just needs to be a little more writing practice and training to reach the full potential.

This is a great series I really loved it. Story line really draws you in and keeps you glued to the book.

fantasy beyond imagination!!! can't put down the book until it's done. very good job, nick!!

(review of free book)
Alyksandrei reviewed on Sep. 12, 2011
(no rating)
I loved this book! Now to figure out how to acquire book two without using an online payment option . . . must buy next book!!!!!

Loved this book! Very well written and gripped me to the very end.

Legon Awakening is an amazing start to this series. Nick's book has universal themes with unique, brilliant twists. As I read I realized how original and dynamic his ability is to craft a story that completely draws you in. It definitely left me wanting more.

(review of free book)
Brian Rathbone reviewed on May 6, 2011

This is a really creative story and the author has created an incredible world for his characters. I couldn't put it down and I can't wait for the next one!

(reviewed the day of purchase)
AngelEyes reviewed on July 26, 2010

This is the best fantasy story ever. It has it-all mystery, great characters, adventure, and humor. I have listened to Legon three times now and am really looking forward to the next book in the series. The narrator is really good in speech, speed, & anunciation. I have never had to back up to relisten because the words could not be heard and understood or the speed went too fast. The charactors are very lovable and I find myself laughing out loud at their banter and almost crying at their distress. As far as fantasy novels go this one is a must read for any one who is into fantasy books. I want to hear alot more from Nicholas Taylor. Keep up the adventure.

You have subscribed to alerts for Nicholas Taylor.

You have been added to Nicholas Taylor's favorite list.

You can also sign-up to receive email notifications whenever Nicholas Taylor releases a new book.