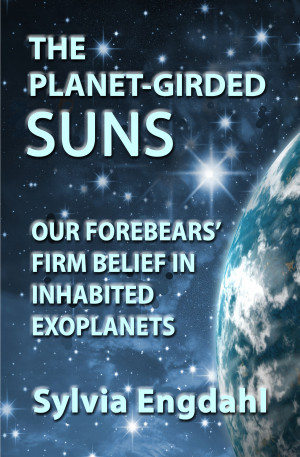 The Planet-Girded Suns: Our Forebears' Firm Belief in Inhabited Exoplanets

This is not a science book--rather, it belongs to the category known as History of Ideas. First published by Atheneum in 1974, it tells the story of the rise, fall, and eventual renewal of widespread conviction that we are not alone in the universe. In this updated edition the chapters dealing with modern views have been revised to reflect the progress science has made during the past 40 years, including the actual detection of planets orbiting other stars.

More poetry from past centuries, source notes, and an extensive bibliography have been added to this edition. In addition it contains a new Afterword, "Confronting the Universe in the Twenty-First Century," discussing the relevance of past upheavals in human thought to an understanding of the hiatus in space exploration that has followed the Apollo moon landings.

From the published reviews:

"Engdahl has marshalled an impressive and fascinating selection of primary sources--including a roster of believers that includes Newton, Ben Franklin, Walt Whitman, and rocket pioneer Robert Goddard; and . . . reminded us that our ancestors entertained a view of the universe that was larger and more imaginative than the history books lead us to believe. Challenging and original." --Kirkus Reviews

"In a brisk, engrossing account Engdahl traces the theories and speculations concerning the possibility of extraterrestrial intelligent life throughout history. . . . This [book] is based on original research in primary sources and smoothly incorporates many quotations from scientists, philosophers, poets and theologians." --ALA Booklist

"The Planet-Girded Suns is a beautiful example of what the disciplined imagination can do. . . . It is a fine, carefully done history of the ideas about other worlds--nicely balanced in its presentation of the informational and mystical elements of the subject." --Horn Book

"The substantial treatment of the history of the idea of other solar systems, based largely on research in primary documents, should make it of use to scholars." --Isis One Hundred Second Critical Bibliography of the History of Science and Its Cultural Implications

"Easy to read and on a timely subject approached from an original point of view, this also serves as a model to show how an idea is researched and documented." --School Library Journal

"By carefully reconstructing her story from voluminous notes on many writers, both well-known and obscure, Engdahl has given vitality and dimension to the idea of extraterrestrial intelligence." --Cosmic Search

"This is an important and interesting book. . . . The author's thought-provoking presentation on the subject should provide some fascinating reading." --National Space Society, 2012

"Engdahl has crated a well-crafted, well-researched and unique view on exoplanets, and is a must-read for those who want a different view on space than the usual technical one." --Readers’ Favorites, 2012
Available ebook formats: epub mobi pdf html
First 35% Sample: epub mobi (Kindle) Online Reader
Price: $3.99 USD
Buy Add to Library Give as a Gift
How gifting works
Create Widget
Tags: space astronomy seti extraterrestrial life science and religion history of science exoplanets poetry about space history of ideas
About Sylvia Engdahl

Sylvia Engdahl is the author of eleven science fiction novels. She is best known for her six traditionally-published Young Adult novels that are also enjoyed by adults, all but one of which are now available in indie editions. That one, Enchantress from the Stars, was a Newbery Honor book, winner of the 2000 Phoenix Award of the Children's Literature Association, and a finalist for the 2002 Book Sense Book of the Year in the Rediscovery category. Her Children of the Star trilogy, originally written for teens, was reissued by a different publisher as adult SF.

Recently she has written five independently-published novels for adults, the Hidden Flame dulogy and the RIsing Flame trilogy. Although all her novels take place in the distant future, in most csses on hypothetical worlds, and thus are categorized as science fiction, they are are directed more to mainstream readers than to avid science fiction fans.

Engdahl has also issued an updated edition of her 1974 nonfiction book The Planet-Girded Suns: Our Forebears' Firm Belief in Inhabited Exoplanets, which is focused on original research in primary sources of the 17th through early 20th centuries that presents the views prevalent among educted people of that time. In addition she has published three permafree ebook collections of essays.

Between 1957 and 1967 Engdahl was a computer programmer and Computer Systems Specialist for the SAGE Air Defense System. Most recently she has worked as a freelance editor of nonfiction anthologies for high schools. Now retired, she lives in Eugene, Oregon and welcomes visitors to her website at www.sylviaengdahl.com. It includes a large section on space colonization, of which she is a strong advocate, as well as essays on other topics and detailed information about her books. She enjoys receiving email from her readers.

Reviews of The Planet-Girded Suns: Our Forebears' Firm Belief in Inhabited Exoplanets by Sylvia Engdahl

You have subscribed to alerts for Sylvia Engdahl.

You have been added to Sylvia Engdahl's favorite list.

You can also sign-up to receive email notifications whenever Sylvia Engdahl releases a new book.