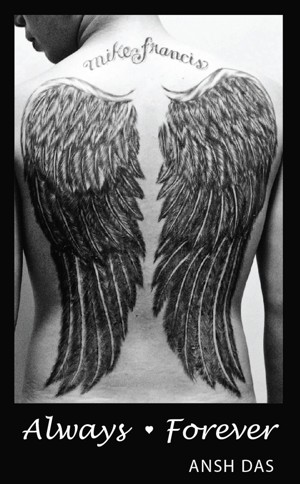 Ansh Das (better known as AD) is an IT nerd in the morning, an author by noon, an activist in the evening and a healer by night. That sequence may change a few times in any direction during the course of the day. He is from India and lives in Hong Kong.

This book entitled Always Forever has several vital points that the public must pick it up and read for it.

The theme - love in the real story. Mikee was destined to meet AD. AD has been a healing angel up until now. Akashic Records told AD to be the one showing the path to Mikee. Their love began upon meeting each other in the Mr.Gay event. The story revolves around how AD has fallen in love with Mikee, until Mikee was sick, and post Mikee's death.

I was startled by the part where AD has actually sensed some omen before the unfortunate happened. The tattoo behind his back has just reminded how AD really wanted Mikee. Their love was not painted with the homophobic scenario of which it was an usual scene in everywhere around the world. Having after read the whole book, I thought it was a fiction, but it was not. The love that lasts forever, despite meeting up in a short period of time, has brought them to another level of spiritual levitation. It wasn't a typical dramatic gay relationship. At first I would have thought the gay relationship would never be ended up without a fantastic, fanciful gay sexual pleasures portrayed.

But it was not even a single hint of such display throughout the book. In fact, it was later, that I found out why the typical gay love must be unjustifiably connected to those fantasies. It was not every gay man's relationship. Instead, his story has brought the Mendoza family close to AD. You could hardly tell that they were in fact a gay couple after all the normalization of stereotypes. The Phillipino family has been a good role of models to which all family members who are connected to LGBT could learn from.

It was the hope that gives AD another perspective of life. And it has taught us lesson that we must not give up on small little things in life, cherish those little things like Mikee has done, give life to those who have saddened, sick, depressed. I pray Mikee has a good time in heaven.

The journey begins with a meticulously recorded account of the build-up to a relationship; one that holds our attention because we’ve all been that route and can vicariously relive our own experience through his. The vividly captured detail of Manila, on the eve of a Mr. Gay World contest, reinforces the verisimilitude of the narrative, and our interest escalates as we realise this is going to be less of a novel than the genuine article. It’s about as contemporary as any tale can be. We follow much of the development of this trans-oceanic love affair via SMS text messaging, and we share the eagerness and aching thumbs of racing to tap out those sometimes inane sentences, the impatience for those replies and the effort of trying to read what’s left unsaid between the lines. About halfway through, a sense of foreboding builds as we wonder if the angel wings tattooed on the back of the beloved are destined only to briefly brush this earth, but we draw consolation from the words of ‘Our Song’ quoted at the book’s beginning: ‘This song is not about loss, it’s about gain’. A deeply personal and beautifully crafted memoir. Peter Moss (author of the Singing Tree)

You have subscribed to alerts for Ansh Das.

You have been added to Ansh Das's favorite list.

You can also sign-up to receive email notifications whenever Ansh Das releases a new book.