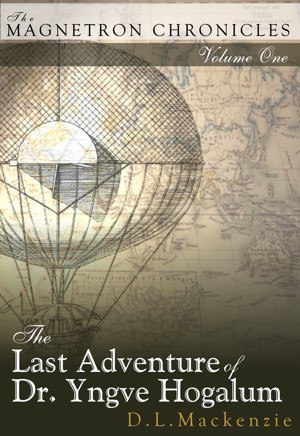 By D. L. Mackenzie
In this first novelette of the Magnetron Chronicles series, eccentric Nineteenth Century inventor Phineas J. Magnetron reveals his association with the secretive Hogalum Society. When his mentor and Society founder Dr. Hogalum dies, Phineas embarks on a daring and improbable caper to bring the good doctor's greatest dream to fruition posthumously, thus unearthing a haunting and compelling mystery. More
Phineas Magnetron is an eccentric Nineteenth Century inventor and former Union soldier whose war injury has unaccountably bestowed upon him a strange gift he doesn't completely understand. No stranger to peril and derring-do, Phineas is asked to join a secret organization of crime fighting adventurers by none other than Society founder, Dr. Yngve Hogalum.

Traveling the globe in their Luftigel electric airship, Phineas Magnetron and his Hogalum brothers encounter mistrustful policemen, mentally ill criminals, wood-craving aliens, a witch doctor, a mad oracle, and a cross-dressing female matador, among many others. However, this "steam dream team" always manages to triumph over impossible odds and improbable obstacles as they preserve order in a disorderly world—with all the Steam Age weird science they can muster.

The Magnetron Chronicles is a serialized steampunk tale re-envisioning the future of generations past with all the breathless melodrama and tumult of that Victorian-era pulp fiction staple, the "penny dreadful." The narrative harks back to the grandiose style of Jules Verne and H. G. Wells, but gently satirized with a sprinkling of purposeful anachronisms, double entendres, tongue-in-cheek inventions, and droll Twainian humor. Adapted from "The Secret Journals of Phineas J. Magnetron," a web serial characterized by short chapters with cliffhanger endings, the story builds chapter by chapter, volume by volume, as quirky new characters join the fray and perplexing new mysteries and situations arise.

The Magnetron Chronicles is a planned 12-volume series of novelette-length volumes. In this first novelette of the series The Magnetron Chronicles, we are introduced to Phineas J. Magnetron, an eccentric Nineteenth Century inventor blessed with a strange gift he doesn't completely understand. As a former soldier and current member of the Hogalum Society, an inscrutable secret organization of crime fighting adventurers, Phineas is no stranger to peril and derring-do. But when the Society founder dies, Phineas embarks on a daring and improbable caper to bring the good doctor's greatest dream to fruition posthumously. In the process, he not only horrifies his Society brothers, but unearths a haunting and compelling mystery.
Download: epub mobi (Kindle) pdf more Online Reader
rtf lrf pdb txt
Price: Free! USD
Add to Library
Create Widget
Tags: adventure humor victorian steampunk series inventor alt history steam age
About D. L. Mackenzie

D. L. Mackenzie pounds on a computer somewhere in the desiccated cultural wilderness of Phoenix, Arizona. When he's not writing or more gainfully employed elsewhere, he enjoys hiking the valley's surrounding mountains, traveling, listening to obscure music, and performing unremarkable household chores with his hyperactive wife. He has a love/hate relationship with American politics and is known to bore and annoy anyone within earshot with his radically sensible political ideas. He has written scads of scandalously intemperate opinion pieces and a short story or two, but remains smitten with classic fiction by such authors as Mark Twain, Edgar Allan Poe, Jules Verne, and H. G. Wells. His new (2012) series "The Magnetron Chronicles" brings eccentric inventor Phineas J. Magnetron out of mothballs for new tongue-in-cheek neo-Victorian adventures in the heady Age of Steam.

Also in Series: The Magnetron Chronicles

You have subscribed to alerts for D. L. Mackenzie.

You have been added to D. L. Mackenzie's favorite list.

You can also sign-up to receive email notifications whenever D. L. Mackenzie releases a new book.