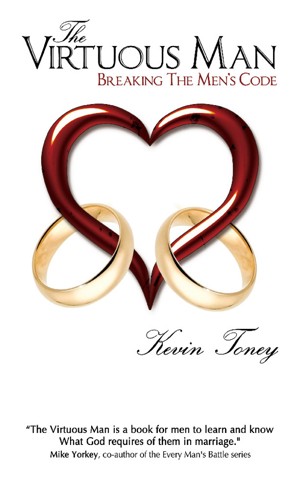 By Kevin Toney
A "How To" book for helping men break the cycle of giving in to sexual temptation and infidelity, providing the tools they need to achieve this. Book addresses misconceptions ("Men's Code") that men have learned from an early age regarding marriage and family, the baggage that men often bring into their marriages and their struggle in letting go of them. This book may help save your marriage! More
The Virtuous Man: Breaking the Men's Code, by musician, composer, and author Kevin Toney, is both autobiographical journey and learning tool. Mr. Toney states that there is a "men's code" that is impressed onto a man beginning at boyhood. This "code" is in direct contradiction to "God's code" on how men should behave as husbands, fathers, sons, and brothers. "The book begins by telling the story of how I learned and embraced the 'Men’s Code,' Mr. Toney says, "its early beginnings, its rise to power, my crash and my point of turning things around. Then the book becomes a bible manual for men to study God’s word on becoming virtuous." He speaks about the first time his father had "the talk" with him and his brothers, through encounters in high school, meeting his future wife, and how by following this unwritten "men's code" he nearly brought his 25-year marriage to an end.

Mr. Toney's turning point came when his wife confronted him about an affair he was having. He was told to leave his house and, after spending a night at a hotel, he called his friend James Newton whom he had tried unsuccessfully to reach the night before to use him as an alibi. Mr. Newton said he wouldn't have agreed to be his alibi, and instead told Mr. Toney how he had been in a similar situation and lost his wife in a divorce. "He told me," says Mr. Toney, "that if I loved my wife and family, that I should fight for them and do whatever was necessary to change my predicament. He then directed me to read Bible verses that clearly pointed out the sin of adultery, its consequences and what God directs us to do regarding our marriage... He then gave me his pastor’s telephone number who recommended us to a marriage counselor."

There are several important things to learn from observing this brief story. First, he needed to be confronted with his sin. Men rarely admit sin to themselves. Second, he was given the standard by which to measure both his inward heart attitude and his outward social behavior. Without this standard -- "God's code" -- there could be no real change. Third, he was given assistance. The marriage counselor was a Christian, and the counselor helped both Mr. Toney and his wife deal with his infidelity and its consequences. They needed to be guided and encouraged through this time in their marriage. It would be impossible to restore it on their own.

The second part of the book comprises 13 chapters devoted to specific topics such as "Understanding What Love Is, "Divorce" and "Making Choices, Making Changes." The chapters are arranged so that there is a narrative lesson; bible verses for study; notes on the bible passages to aid in making observations, drawing conclusions, and applying change; five questions for self-reflection; and blank pages for journaling.

The third part of the book on additional resources takes some of the best from existing publications and puts them at the reader's fingertips.

I recommend this for both men and women, married and unmarried. Ladies, you will be hard pressed to find in another book what men, including your man, assimilate into their thinking, how they do it, and how it affects them.
Available ebook formats: epub mobi pdf rtf lrf pdb txt html
First 15% Sample: epub mobi (Kindle) lrf more Online Reader
pdb
Price: $7.99 USD
Buy Add to Library Give as a Gift
How gifting works
Create Widget
Tags: adultery infidelity men issues marriage help spiritual teachings relationships and spirituality men manual men self help help for my marriage
About Kevin Toney

Kevin Toney is a 2x Grammy-nominated and award-winning pianist, composer, speaker and author. Best known for his musical genius gained international fame as one of the founding members of The Blackbyrds whose pop hit songs, "Walking In Rhythm" and Rock Creek Park” rose to the top of the Pop, R&B and Jazz charts. As a solo artist, Kevin has released twelve acclaimed albums. His hit songs "Kings" and “Aphrodisiac” has garnered incredible national success. STRUT (2001) was selected by the 2002 Winter Olympics Committee to be a part of the “official Olympic soundtrack”. Kevin is also an in-demand speaker across the Country with a focus on the spiritual health of men and their marital and family relationships.

His acclaimed book "The Virtuous Man ~ Breaking The Men's Code" addresses misconceptions (“Men’s Code”) that men learn from an early age regarding marriage and family. He shares how God brought him out of infidelity to saving his marriage of then 25+ years and in the process broke the “Code”. Kevin and his wife are celebrating 38 years of marriage this year! Kevin’s latest book, “Super Glue Your Love Relationship” with forward by Dr. Willie Jolley, gives tools to help bond, grow and keep your love relationship unbreakable.

Kevin earned his BA in Composition and Jazz Studies from Howard University. His awards and achievements include two Grammy nominations, three RIAA Gold Record awards, an NAACP Image Award, a National Endowment For the Arts Fellowship and is a member of the Phi Beta Sigma Fraternity.

You have subscribed to alerts for Kevin Toney.

You have been added to Kevin Toney's favorite list.

You can also sign-up to receive email notifications whenever Kevin Toney releases a new book.