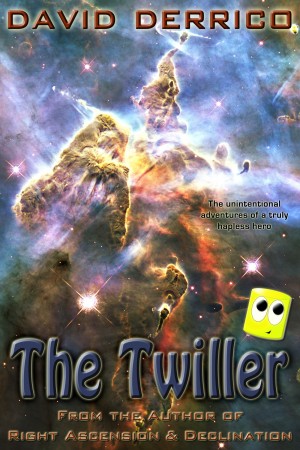 By David Derrico
The Twiller is a comedic novel that follows Ian, our hapless hero, as he's whisked around the Universe after his abduction from Earth. His companion, the Twiller, is about the only alien being who treats humans better than toenail lint. Ian is faced with a series of humorous and bizarre experiences on the worlds he visits, utterly failing to realize the slight similarities to places here on Earth. More
Ian Harebungler, our hapless hero, just can't catch a break. First, the deli ran out of his favorite cucumber sandwiches. Then he left the gas on at home. But the lowlight was being abducted from his front yard by a particularly ill-mannered alien, one who apparently doesn't believe in anesthetic, no less. Fortunately, Ian is saved by an unlikely ally: the Twiller, whose bravery is somewhat overshadowed by its uncanny resemblance to a floating yellow marshmallow with big eyes.

The Twiller follows the adventures of Ian and his newfound companion as they are whisked around the Universe, and Ian learns how difficult it can be to find his way home to a backwater planet called "Earth." Along the way, Ian must survive the traffic of El Leigh, the enthusiastic protestors of Bez Erkeley, and rampaging politicians in the city of WMD. Even worse, he must contend with exorbitant prices in the city of York, endure the heat and crazy drivers in Fleur Ida, and struggle to escape the small planet of "Huh? Why E?" before he contracts island fever. Astute readers might pick up on subtle correlations to real places here on Earth, but my lawyers have reminded me to state that such resemblances are purely coincidental.

As it starts to dawn on Ian that the bizarre planets he visits suffer from many of the same problems, comical situations, and inane rules all too familiar to him, he stumbles upon an important secret that gives his quest to return home added urgency. Can Ian make it home? Will he arrive in time to prevent a terrible catastrophe? And can he find a flight without a Saturday night stopover? The answer lies with the Twiller…
Available ebook formats: epub mobi pdf rtf lrf pdb txt html
First 25% Sample: epub mobi (Kindle) lrf more Online Reader
pdb
Price: $2.99 USD
Buy Add to Library Give as a Gift
How gifting works
Create Widget
Tags: scifi adventure action humor young adult science fiction funny humorous comedic derrico
About David Derrico

Reviews of The Twiller by David Derrico