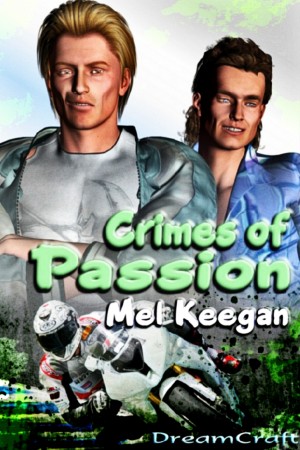 Just when you thought the world was perfect...! Brad and Frank have built a great life in LA. Brad was on the bike racing circuit and Frank came west to work in the music industry. They met at the track, before the crash that ended Brad's racing days -- and Frank has some skeletons in the closet that are about to come rattling out and refuse to be stuffed back in! At last: comedy, Keegan style!
Available ebook formats: epub mobi lrf pdb html
First 10% Sample: epub mobi (Kindle) lrf more Online Reader
pdb
Price: $2.00 USD
Buy Add to Library Give as a Gift
How gifting works
Create Widget
Tags: gay romantic comedy glbt gay romance mel keegan glbt romance gay comedy glbt comedy
About Mel Keegan

Reviews of Crimes of Passion by Mel Keegan

You have subscribed to Smashwords Alerts new release notifications for Mel Keegan.