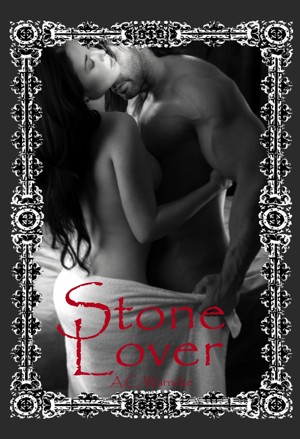 Rated 4.50/5 based on 4 reviews
Romance, a little drama, a lot of passion and gargoyles. From the start, the attraction between Melanie and Vaughn is explosive but what Melanie doesn't know is that when the sun comes up Vaughn becomes a stone beast, a guardian of the worlds and a protector of Melanie.

Stone Lover contains plenty of heat, strong language and quite a few sexual situations that some readers may find offensive More
Romance, a little drama, a lot of passion and gargoyles

Melanie Jacobs has always been a little out of step with the rest of the world. She sees things that aren’t there, from the magnificent stone birds that fly overhead to the enchanted castle in the middle of the city. It’s when she gets an apartment in the castle that she discovers that she isn’t the one seeing things; it’s the rest of the world that is asleep.

Vaughn Nosuntres explodes into her life New Year’s Eve and he is unlike any man she has ever known. The attraction is magnetic, overwhelming and irresistible. Powerless to resist, they embark on a passionate affair under the cover of night.

But what Melanie doesn’t know is that when the sun comes up Vaughn becomes a stone beast, a guardian of the worlds and a protector of Melanie.

Like most writers, I spend most of my time telling myself stories and occasionally writing them down when they get too loud to remain in my head. Each book likes to be created in its own way, which makes establishing an environment that is most conducive to writing quite difficult, though it occasionally involves Dove chocolates, music, minesweeper, lots of solitaire, notebooks and scraps of paper, doodling and day dreaming, and fruity, sugar-free bubble gum, not necessarily in that order and not always at the same time.

Of course, none of this would be possible without the love and support of my very loving and very tolerant family, who politely listen as I go on and on about my characters' motivations and back stories, their connections within the worlds created and how they fight to gain control of their destinies. But I am a cruel writer and make them earn their happy endings.

Since I am also a Romantic at heart, they are all happy endings.

I love hearing from readers.
Email me at: acwarneke@yahoo.com
or connect on facebook: www.facebook.com/ACWarneke
or visit my blog and leave a comment: acwarneke.com

I’m in love with gargoyles. Who knew? These are some really hot, sexy, wonderful gargoyles and I WANT ONE!

Vaughn and Melanie are a fantastic couple that make you believe anything can happen. Their romance and passion are a tale for the ages! Love can conquer all!

Melanie is drawn into Vaughn’s supernatural world and falls in love with him. Pesky little imps decide they want to keep her to themselves so they create all kinds of problems for her. Beware…all those pesky little problems we have aren’t gremlins, they’re f*ing imps (to quote Armand and Vaughn!).

Melanie and Vaughn are willing to risk everything to be together. There’s nothing they wouldn’t do for each other, even if means giving up everything. Melanie is a strong heroine who finds her way in a strange new world. Vaughn is a wonderful hero who feels very deeply and wants to do anything for Melanie.

There were several twists and turns in this story and all of them wonderful. I found myself crying at times and hoping at others. I love the world that A.C. has created. I’m so excited there are more stories in this series. It’s a wonderful world and I don’t want to leave it behind!

A copy of this book was provided by the author/publisher in exchange for an honest review.

Talk about a whirlwind romance! Wow...A.C. Warneke, you have a fan for LIFE!!! I LOVE your work! I really hope you have a 2nd and 3rd book for Rhys and Armand; I REALLY do.

Melanie has always been a little "different" from her friends and family; her head stays in the clouds, and she believes in magic, when everyone else is like, "Yeah, sure, whatever." She rents an apartment in this nifty, castle-like building, where 3 gargoyles stand sentry over the roof of the building. Melanie can't seem to stay away from the gargoyles, especially one in particular.

That gargoyle just happens to be Vaughn, who becomes as attracted to Melanie as she is to him. However, she doesn't realize Vaughn is the gargoyle she swoons over until later in the book. They meet in person at a club she frequents with her friends, and would you believe it? -- Melanie and Vaughn get busy right there in the bathroom! The attraction they both feel for each other is too difficult to resist.

(Today class, we will learn about one night stands...LOL) That was the only part that I hesitated on. I understand the attraction, but geez...they couldn't go to a hotel room, or something? LOL

Anyway, long story short, Melanie learns more about Vaughn, Rhys, and Armand, and how they actually become gargoyles by day and men by night. She also learns a few more things about them, as well as discovering there really is magic in the world, as well as other beings that are not human. Of course, some of those beings don't want her with Vaughn, and they do things to try and prevent their relationship from happening.

But, love conquers all and prevails. This was a great book! The sacrifice Vaughn gives to Melanie was so sweet; there is some drama to that, however. I really don't want to give away what happens after that, because that is what kept me up past 1 am reading it on a weekday, waaaay past my bedtime. Suffice it to say that Melanie's "sacrifice" is...um...quite interesting! :-)

The romance in this book is mouth-watering; it just makes me want a gargoyle for myself. I won't look at those stone statues the same way ever again! Please do a trilogy, and write Rhys and Armand's books! (Especially Armand; I would love to see that taciturn bloke get his comeuppance!)

I really enjoyed this book. The characters were great, the emotion was so real. I hope there is another book to follow Rhys and Jenna's story. I loved the mystery. Although an explanation as to why Melanie could see what other humans couldn't would've been nice, or why the imps were attacking her. But other than that it was a really good book.

Wow what an amazing book that made me smile, laugh out loud, gave me butterlies, got me hot under the collar and made me cry.

Though in true A.C. style the book hooks you in and you won't be disappointed! The chemistry between Vaughn and Melanie is incredibly hot, spicy and strong. And A.C's amazing writing style pulls the readers into the story as if you are the character feeling the emotions being felt.

The story see's Melanie, a young woman who has a great imagination when it comes to mythical creatures, fearies and the like, who works for her parants candy store making chocolate, move out of her parents home. She moves into an apartment (in a castle in the city, that others don't seem to see)and is drawn to the roof and the three Gargoyles that over look the city and gravitate to one in particular.

The Gargoyle brothers are guardians of the city, by day they are stone beasts and by night they are strong sexy men.

The eldest brother Armand doesn't like the fact that Melanie visits the roof and why/how the heck is a human living in the castle?
He also see's that his brother Vaughn is enjoying the attention Melanie is giving him and that a strong bond is forming between them.

Protective Armand sets out to get Melanies out of their lives and erase her memories and send her back to where she came from before things between Vaughn and her gets serious.
And to save Vaughn from the crippling heartache a human can inflict on them, (which Armand has first hand experience in)and to save Melanie from the dangers that their world represents.

So on New Years eve, Armand sets out to get Melanie out of their lives. But Melanie seems to be harder to compel than he first thought, after Rhys and Armand try their charm on her.
The fates seem to have other ideas for Melanie and Vaughn and the story takes you on this steamy adventure of these two that are destine to be together. But in order to have their 'Forever' the cost will be a sacrifice, that maybe too much of a price to pay. Can Vaughn and Melanie have a Happily ever after?

The story is very addictive and you will not want to put it down. Their is also a second book in the series 'Stone Romance' that sees the relationship of Rhys (Vaughn's brohter) and Jenna (Melianie's sister) from this book and seems just as promising!

You have subscribed to alerts for A.C. Warneke.

You have been added to A.C. Warneke's favorite list.

You can also sign-up to receive email notifications whenever A.C. Warneke releases a new book.