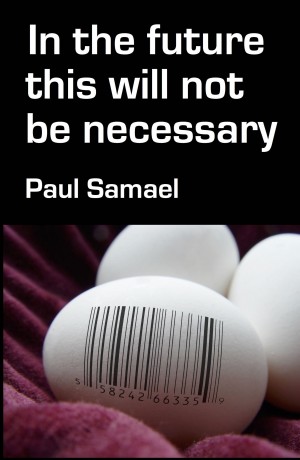 In the Future This Will Not Be Necessary

Rated 4.75/5 based on 4 reviews
A thought-provoking novel about a technology-obsessed cult and the disillusioned narrator’s obsession with the cult leader’s wife. “Fluent [and] witty”, “Well written and teeming with interesting ideas”, “Fantastic” (comments by members of peer review site youwriteon). More
Miles Jensen has a confession to make. To the "true believers", he is the faithful guardian of a website devoted to the late Pete Novotnik, founder of a future-obsessed internet cult. But Miles is not a true believer - he only got involved out of a desire to rekindle an affair with Pete's wife, Kay. Hoping to shock the true believers into a crisis of faith, he decides to reveal his true colours and his dubious role in Pete's death. But when a journalist starts to investigate, he is forced to confront the truth about his motives for wanting to undermine the cult and his feelings for Kay.

This story is about an insecure writer who by accident becomes deeply entwined with the key figure of a "techno cult" - a bunch of nutters convinced that the "singularity" is coming and humans are about to become part of the "overmind". It's a well written tale and it drew me in from the early pages. I read on, wanting to discover what would happen next.

SPOILER ALERT: I felt the ending was a bit of a let down. I was hoping for a spectacular twist (it seemed like Pete and the narrator might be multiple personalities of the same person). It wasn't explained why Pete disappeared for months, or why Kay had been so cagey with the narrator. It wasn't even revealed whether Jonah was Pete's son. There was A LOT left unresolved - in fact the ending seemed to ask more questions than it answered. I think if the ending were re-written "adaptation"-style then this could be really great. At moment this is unfortunately too downbeat.

"Maybe I can’t bear the thought that all this anguished self-examination has been a futile exercise." -Miles Jensen

Bear this quote in mind while reading "In the Future, This Will Not Be Necessary". Miles' repeated doubts about his reactions and perceptions can seem tiresome. Some protagonists are easy to like. Others ....,

But persistence is critical. The novel aims to question the reliability of our minds, how our desire to find patterns and meaning can make us ignore the less attractive possibility, that none might exist.

If my mind were a jury (I swear there are enough voices up there) it would be split on one issue. Miles is vague about what he knows regarding EGnosis beliefs for the first half of the book. Part of me can see this builds some suspense. Part says it felt like being held back by an invisible arm from tasting the thematic meat of the narrative.

But once tasted, the ideas satisfy. And Samael (appropriately self mocking pseudonym, as readers will see) reminded me of Julian Barnes, particularly "The Sense of an Ending". And should you find yourself losing patience with Miles Jensen, ask whether you dislike how it mirrors your own insecurities too closely.

Paul Samael’s In the Future It will Not Be Necessary, which takes place in the first years of the new millenium, deals with some of the possible outcomes of where our rapid advance in technology, especially computers, might be taking us. Despite Samael’s emphasis on the future, as I read this intriguing story, my thoughts kept turning back in time to long dead authors. Samael’s protagonist, Miles Jenses, is an emotionally risk averse modern day Hamlet. Miles does not live life so much as he thinks about it. For Miles, life is like a game of chess where the game is long because of the thinking not because of the time it takes to move the pieces.

Paul Samael’s foil for Miles is Pete Novotnik. Despite being placed on a pedestal by the cult-like followers of Pete’s messianic vision of the coming world, Pete is a man of action. When Pete gets an insight into the future, a future that moves toward a collective mind like Jung’s collective unconscious made conscious, he doesn’t just ponder it, he takes it to Miles to have it challenged. While Miles dithers about his feelings toward a fellow student, Pete marries her. As his vision becomes more real to him, Pete is willing to leave his family to pursue the ideas with which he is obsessed. Pete acts; Miles derides Pete’s actions. After a unusual chain of events leads Miles to be Pete’s biographer, Miles writes about not being able to write about Pete.

In the Future is as much a story of ideas as it is about characters. In that way, the story telling reminded me of Camus or Sartre. For my money, Samael, does a better job of conjoining ideas and people than those authors. The main idea that gets deftly discussed is a kind of Marxian ideal that is transported from the realm of communal economics to communal psychology.

Throughout In the Future there is a dark inside joke between author and reader. Miles spends a lot of time deconstructing what he sees as Pete’s narcissism. As Mile angrily points the finger at Pete’s self-regard, the reader has the opportunity to stand to the side and point the finger at Miles, who is a sumo wrestler of a narcissist compared to Pete’s flyweight self-absorption. Socrates cautioned that the unexamined life was not worth living. By turning a very bright light upon Miles’ incessant thinking, Samael cautions that the over-examined life is not worth living either. In our age of self-absorption, that message should be shouted from the rooftops. Samael does it more quietly, but in a way that is very memorable.

This is a very good sci-fi novel. The main story tells of a freelance writer who becomes involved with a sort of techno-guru internet cult due to his previous involvement with the leader's ex-wife. Thus there is a personal element and a general/social element woven together in the narrative.

The techno-guru is a computer enthusiast who extrapolates the rate of growth of computing power into a concept of the Singularity involving a leap in human evolution - this is not the same Singularity I'm more familiar with, the idea that at some point machines will design themselves better than we can design them, hence rendering humanity superfluous. In fact, it is an opposite Singularity! Nevertheless, in this new-age age you hear a lot of nonsense about leaps forward in human evolution, so the guru's ideas slide easily into all that.

The book rings true to me and reminds me of the time I worked at a bookstore in Palo Alto in the early 1990's. This was at the very beginning of the world wide web, and nearby Stanford University was as important then as it has been since to the development of the internet. In the cafe, there was one young man who held court offering techno-predictions to a coterie of fellow travelers, and I remember at the time thinking that this could well turn into a cult much like the one described in this novel. That it did not is more a testimony to the uber-rationality of most computer geeks. They are often enthusiastic and cult-like (witness the Apple phenomenon) but usually don't end up wearing identical Nikes and storing exact change for the spaceship lurking behind an approaching comet. They want to be here to see it all go down.

The personal story becomes more dominant by the end, emphasizing the "novel" in "science fiction novel", which also brought to mind the recent, interesting movie 'Sound of my Voice', in which the central character is also an outsider who becomes strangely entangled, emotionally, with a cult figure. Another similarity with that film is the idea it gave me that you don't have to "like" a character very much in order to appreciate a story told from their point of view.

I liked a lot of things about this book, and would recommend it to anyone who enjoys a thoughtful, intriguing, and worthwhile book.