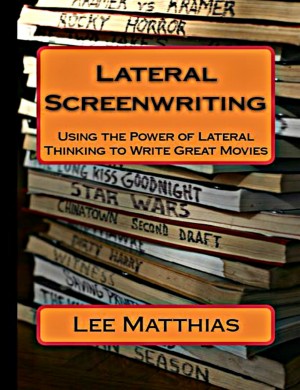 Screenwriters and storytellers have been looking for deeper insight to their craft for years. Nothing truly new has been written in decades... until now.

"Lateral Thinking" is a process for generating creative solutions to real-world problems. Coined by author and business consultant, Edward de Bono, it has helped the left-brain worlds of business and government to revolutionize, achieving unheard-of success.

Lee Matthias returns this concept to its origins, the right-brain world of creative expression. Not another "how-to" on writing for Hollywood, this book decodes the creative process itself, applying it to storytelling in general and screenwriting in particular. LATERAL SCREENWRITING is packed with ideas, examples, stories, and the genius of the world's greatest filmmakers. Rather than re-hashing a thousand other works on the "how" of screenwriting, this book helps writers find their best ideas toward writing the greatest movies never-yet-made.

I am a writer with three published novels, others on the way, a nonfiction book just released, several screenplays written and in development. During and after college, I worked as a theater projectionist and manager, in public relations, and as a literary agent selling to publishers and producers. Two heads are better than one, so I keep a skull on my desk for inspiration (and a second opinion). I currently work as a computer network administrator in government.

You have subscribed to alerts for Lee Matthias.

You have been added to Lee Matthias's favorite list.

You can also sign-up to receive email notifications whenever Lee Matthias releases a new book.