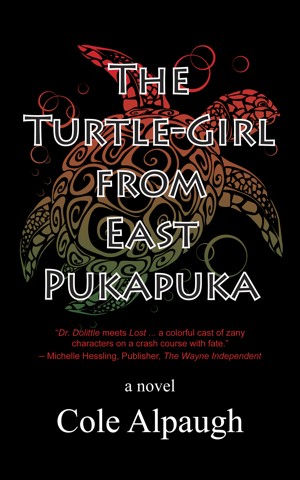 The Turtle-Girl from East Pukapuka

The fates of a little girl, a Loggerhead Sea Turtle, an injured downhill skier, a salvage boat owner, a blond policewoman, a pair of pirates, a shark god and a cannibal collide on the tsunami-ravaged island of East Pukapuka. More
The island of East Pukapuka lies in the path of a tsunami that will kill everyone but Butter, a little girl more worried about the lives of the injured animals she cares for than her own. Butter is rescued by a Loggerhead Sea Turtle who carries her away on his back. As she and her exhausted savior begin to sink, the girl is plucked out of the sea by Jesus Dobby, the boozy owner of a salvage boat who is thrilled, at first, to have found a genuine “turtle-girl” hybrid. Downhill racer Dante Wheeler “dies” in a terrible skiing accident and revives in a twilight state, having lost all memories of his former life. When he heals enough to leave the rehab facility, Dante heads to Polynesia, where he has found a home in his dreams. There he encounters Ophelia, a beautiful blond policewoman who reluctantly agrees to transport him to East Pukapuka. Jope and Ratu, a pair of bumbling pirates, steal a vessel laden with cocaine. They are hotly pursued by the drug-runners’ hit man Albino Paul, the descendent of cannibals, whose goal is to reclaim his heritage. As in Alpaugh’s beloved first novel, THE BEAR IN A MUDDY TUTU, fate pokes its fickle finger in the lives of these hapless souls with about as much clear intention as a three-year-old in a sandbox. Even the gods are incompetent. Alpaugh’s world offers no lessons in morality. His characters are fatally flawed, hilarious, and heartbreakingly human.
Available ebook formats: epub mobi pdf rtf lrf pdb txt html
First 20% Sample: mobi (Kindle) lrf pdb Online Reader
Price: $6.95 USD
Buy Add to Library Give as a Gift
How gifting works
Create Widget
Tags: pirates cannibal polynesia albino tsunami turtle downhill skier
About Cole Alpaugh

Cole Alpaugh began his newspaper career in the early ’80s at a daily paper on Maryland’s Eastern Shore, where he covered everything from bake sales to KKK meetings. He moved on to a paper in Massachusetts, specializing in feature essays. His stories on a Hispanic youth gang and the life of a Golden Gloves boxer won national awards. At his most recent newspaper job, a large daily in Central New Jersey, he was given the freedom to pursue more “true life” essays, including award-winning pieces on a traveling rodeo and an in-depth story on an emergency room doctor. The doctor’s story ended when the physician brought back to life an elderly woman who’d once been his children’s babysitter. The essay was nominated by Gannett News Service for a 1991 Pulitzer Prize. Cole also did work for two Manhattan-based news agencies, covering conflicts in Haiti, Panama, Nicaragua, El Salvador, and guerrilla raids conducted out of the refugee camps along the Thai/Cambodia boarder. His work has appeared in dozens of magazines, as well as most newspapers in America. Cole’s first novel, The Bear in a Muddy Tutu, was published by Camel Press, an imprint of Coffeetown Press, in 2011. Coming Soon from Coffeetown: Cole’s third novel, The Spy’s Little Zonbi. Cole is currently a freelance photographer and writer living in Northeast Pennsylvania, where he also coaches his daughter’s soccer team. You can find him online at www.colealpaugh.com.

Reviews of The Turtle-Girl from East Pukapuka by Cole Alpaugh

You have subscribed to Smashwords Alerts new release notifications for Cole Alpaugh.

You have been added to Cole Alpaugh's favorite list.

You can also sign-up to receive email notifications whenever Cole Alpaugh releases a new book.