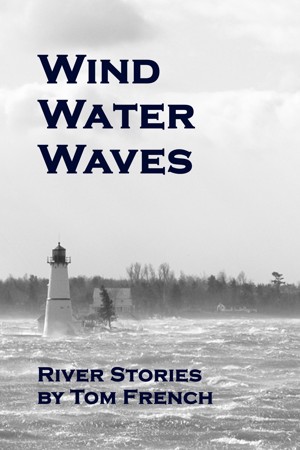 By Tom French
A collection of nine short stories reflecting on various characters' relationships with "The River." More
Ranging in time from the early 20th century to the present, Wind Water Waves, a collection of nine short stories, chronicles how a varied cast of characters’ lives are tied to "The River." The collection begins with "The Last of the Old Timers," the story of four individuals pulling a boat in the fall and recollecting their lives together. Four of the stories, told from different points of view, revolve around a group of young adults grappling with the death of a friend while also realizing that their season of youthful play in a summer wonderland is ending as they are forced to limit their time at the river and test their relationships with each other. "With the River and In the Wind" recalls a harrowing trip across the winter ice when a horse-drawn sleigh crashes through, killing the horses and forcing young Ben into an abandoned cabin until the storm passes. Later, he must confront death again when he recovers the body of a close family friend. "The Midnight Lady" recounts the attempt of two brothers to rob a riverside bank by boat in a fog. "Mom Makes River a Garden" reflects a memory that has blossomed with time. The book ends with "River Murmurs," a glance back to an event in the lives of the characters from the first story.
Available ebook formats: epub mobi pdf rtf lrf pdb txt html
First 30% Sample: epub mobi (Kindle) lrf more Online Reader
pdb
Price: $2.99 USD
Buy Add to Library Give as a Gift
How gifting works
Create Widget
Tags: river summer camps cottage river bank rivers summer vacation summer cabins boat people rivers edge summer camp riverbank riverside river cottage river running summer house rivers and lakes 1000 islands location st lawrence river river crossing river young river rats boatpeople river and lake river walk summer holidays summer fun thousand islands 1000 islands river stories river rat river of life boat and grandpa summertime boat life river boats saint lawrence river
About Tom French

Tom French was raised on island in the St. Lawrence River.

His book, River Views: A History of the 1000 Islands in 3-D, won a Silver Medal in the 2012 Independent Book Publishers Awards for Best Regional Non-Fiction in the Northeast.

He received his Bachelor’s degree from St. Lawrence University, his Masters from Potsdam College, and teaches English in Massena, NY.

His work has been featured in Mac|Life Magazine, Adirondack Life, The Watertown Daily Times, Thousand Islands Life.com, and Stereo World among other publications. Several of his commentaries have aired on North Country Public Radio. He is a member of the band, The Buoyrockers. He spends his winters in Potsdam, NY, with his family.

You have subscribed to Smashwords Alerts new release notifications for Tom French.

You have been added to Tom French's favorite list.

You can also sign-up to receive email notifications whenever Tom French releases a new book.