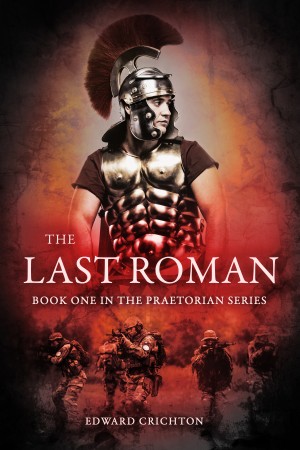 The Last Roman (The Praetorian Series - Book I)

By Edward Crichton
Rated 4.88/5 based on 16 reviews
When Navy SEAL Jacob Hunter is sent to Syria on a mission to eliminate a terrorist cell, his team discovers a mysterious artifact instead. Later, in the furor of battle, its ancient power is activated and the team is hurled through time & space to the age of Ancient Rome, where their first priority is to find a way home. But Rome's duplicitous elite have other plans for these powerful newcomers... More
As war consumes the nations of our world in the year 2021, Navy SEAL Jacob Hunter is sent on a mission to Syria to apprehend a crazed terrorist leader armed with dangerous biological weapons. It’s a routine mission for a man who has spent the entirety of his military career fighting in what many have dubbed World War III, but his life is about to become everything but predictable.

As their mission unravels around them, Hunter discovers a curious trinket that belies all rationality and our understanding of the universe, but he is drawn to it nonetheless, bewildered by its uniqueness. Unable to control his urges, Hunter touches it, and in a flash of brilliant light and intense pain, the team is no longer in contemporary Syria – but in Ancient Rome during the reign of the emperor Caligula.

They stand dumbfounded, unable to comprehend the paradox they’ve created, but the bleak truth of reality soon overtakes their disbelief. The fact that they should not be there becomes obvious almost immediately, as does the thought that with every breath they take, everything history has worked so hard to achieve is at risk of unraveling. Staying alive suddenly becomes a secondary objective, superseded by the theory that their mere presence in Ancient Rome has caused irreparable damage to the timeline.

This won't be an easy task for Hunter and his friends as they will quickly encounter numerous Roman figures straight from his old history books, each with their own agendas, schemes and machinations, including the Caesar himself, who history remembers as little more than an insane tyrant who once tried to appoint his horse as the head of state…
Download: epub mobi (Kindle) pdf more Online Reader
rtf lrf pdb txt
Price: Free! USD
Add to Library
Create Widget
Tags: military history time travel rome roman legion special forces ancient rome navy seal caesar ancient artifacts praetorian guard
About Edward Crichton

Edward Crichton, a native Clevelander, lives in Chicago, Illinois with his wife, where he spends his time coming to grips with his newfound sports allegiances. A long time enthusiast of Science Fiction, Fantasy, History and everything in between, he spends his time reading, writing, and overusing his Xbox (he wishes).

Until recently, Crichton had often hoped for a cat, but his wife decided to let him have a baby boy instead. Born in November of 2013, the child has turned into a little hellion but he and his wife couldn't be happier

Nearly two years old at the time of this Bio update, said little hellion has grown into a wonderful little boy who keeps his daddy busy and occupied doing anything and everything but writing. Now a work-from-home-dad, Crichton squeezes in bouts of writing when he can. Due to his changed lifestyle, he has decided to shift his focus to shorter stories to improve productivity. His first novella, Along the Path of Darkness, will be released October 1, 2015.

Following its release, Crichton will return to work on his long dormant Starfarer Series, again focusing on tighter stories to keep the words flowing...

Also in Series: The Praetorian

Review
VickyWalters reviewed on on Oct. 5, 2017

Good read but not excellent.

(review of free book)
Hannes Birnbacher reviewed on on Dec. 1, 2013

This is a great book, very entertaining. Thank you that it is free. It is full-size (almost 400 pages), and it is not a sample ending in a thrilling moment, but at the end. The same, btw., is valid for the little sample of the second book of the series, so it is pure pleasure to read the free first book as well as the samples, because they are fair.
I am considering to purchase the second book also, as soon as I have found a way to pay for it. The sample shows the authors is developing his skill further, there playing with different views, alternating between the hero and it's girl friend, very amusing.

A great read. I hope they get back to their own time.

Awesome read. Some minor grammatical errors but I couldn't put it down. Now to do all of the work I ignored.

(review of free book)
Virginia Conlin reviewed on on March 17, 2013

Having been to Rome several times and being a roman history buff, I found this book a "can't put it down pageturner".
some of the tactical details got a little boggy at times as well as the intricate descriptions of the rifles,etc.. I would have loved to have had a bit more of the actual details of the day to day hardships compared to 21 century life, but the insight into the roman army life was fascinating and I can't wait to start the sequel.
I really hope there is another sequel coming after the 2nd.

Well written in all regards. Needs to be an unending series!

Excellent story, I found the historical facts and fiction entertaining. I felt that the science fiction aspects were presented in a believable presentation. I enjoyed this story immensely and have already started on the second book of the series.

Glad I checked it out - I couldn't put it down! Excellent mix of historical context, science fiction, and modern day action/adventure. The sequel can't come soon enough!

You have subscribed to alerts for Edward Crichton.

You have been added to Edward Crichton's favorite list.

You can also sign-up to receive email notifications whenever Edward Crichton releases a new book.