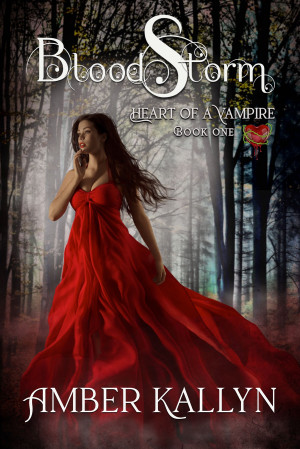 Bloodstorm (Heart of a Vampire, Book 1)


For two hundred years, Niki DeVeraux has hunted the monster who murdered her family, and made her a vampire. She finally catches up to her sire, only to face more than she bargained for. Local vampire clans don’t care for rogues. And the local sheriff, too sexy for his own good, seems to want nothing more than to get in her way. Worse, he stirs something in Niki she’s ignored since her turning, and forces her to remember she’s not just a warrior, but a woman.

Bound by his duties both as local Keeper of the Peace, and sheriff, Shane Spencer must protect humanity, while preventing the recent conflicts between the werewolves and vampires from becoming an all out blood war. When wolves start turning up dead, tensions between the pack and vampire clan grow. Suspicions fall to the only rogue in town, Niki. Yet, Shane knows she’s not to blame. And it has nothing to do with the hot, primal emotions she stirs within him.

One of those rare breeds, Amber Kallyn is an Arizona native who can trace her family's history through six generations in the state. She lives with her four very active children. Included in the menagerie are four cats (though there's always room for more) and a snake.

Amber loves the paranormal, from dragons to werewolves to vampires. She's currently at work on her next book, probably running around the house acting out a fight scene with her collection of swords and daggers. Or maybe, wishing she had claws to practice the other fight scenes. A voracious lover of the written word, Amber found at an early age that she could read fast. Really fast. She devours novels by the day, novellas by the hour, and is always looking to get her hands on more.

Also in Series: Heart of a Vampire

Reviews of Bloodstorm (Heart of a Vampire, Book 1) by Amber Kallyn

This was a really interesting book- 10/10 would recommend it.

I read this book straight through, the prologue hooked me. I liked the fact that some humans knew about the paranormal world and others didn’t. It was a refreshing take; the characters could be more relaxed but had to be somewhat careful at the same time. There is the mystery of who is killing the werewolves, Niki seeking her revenge but through it all we get to witness Shane and Niki fight to be free of their pasts. The battles they face for a future with each other were something that came across well.

Niki is a woman who was changed, physically and emotionally, at the young age of 17. That has shaped her into the hard, closed off, and revenge seeking vampire she is. It was entertaining and endearing to witness Niki’s struggle to open up her heart. Her biggest obstacle of course was Niki herself. Niki couldn’t see a future for herself, having been consumed with avenging her family for 200 yrs.

Shane wasn’t supposed to be a keeper, but the fates chose him instead. As Shane starts to settle into his life as sheriff, shaman and keeper Niki shows up in his town and grabs his attention in more than one way. Shane now has to deal with this undeniable attraction to a rouge vampire, but also the death of weres by vampires. On top of all this Shane struggles to reconcile feelings he has for Niki. Sure he’s the keeper but the weres, vamps, and other paranormal beings out there are monsters, right?

The Vampire King of this territory made for an interesting character and helped to add depth to Shane’s personality. I’m looking forward to reading his story in the next book, Hungerstorm.

I only had a few issues with the story. Why/how was Shane picked to be the keeper instead of who it was supposed to be? How was Niki turned when her whole family was killed? Did her sire not know right away and if not he surely figured it out as she was hunting him for 200 years? So…why didn’t he claim her as one of his making? A little bit more background would have made it a much more engrossing book.

You have subscribed to alerts for Amber Kallyn.

You have been added to Amber Kallyn's favorite list.

You can also sign-up to receive email notifications whenever Amber Kallyn releases a new book.