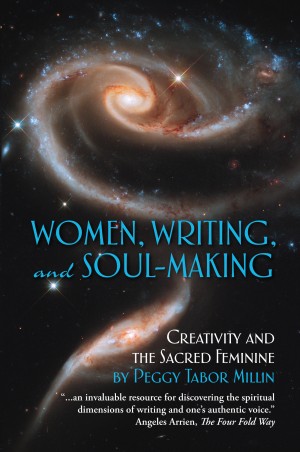 Women, Writing, and Soul-Making: Creativity and the Sacred Feminine

What you will find throughout these pages are insights rather than arguments, suggestions rather than methods, possibilities rather than absolutes. As a result, the content creates space for you, trusting you to interact with what is being said and to create your own path. I invite you to be with the material and to mine it for the answers to the deeper questions that it may arouse.

"We never touch people so lightly that we do not leave a trace."
-from the book "Mary's Way" by Peggy Tabor Millin, and quoted on the Oprah show.

Peggy Tabor Millin facilitates women in the writing process at regional and national workshops and retreats. Based in Durham, North Carolina, she also teaches for retreat centers and for other programs such as Great Smokies Writing Program at University of North Carolina, Asheville; North Carolina Writers Network; Mountain Area Health Education Center, Asheville; and the Institute for the Advancement of Service, Alexandria, Virginia. An engaging speaker, she addresses conventions and organizations interested in creativity, writing and spirituality, women's health, and the healing power of writing.

Peggy combines her knowledge as a writer and writing coach with enthusiasm and humor. She conveys the message that when writers focus on telling their personal truths, rather than on publication, the quality of their writing soars and impacts the quality of their lives in a positive way.

In 2010, Peggy was awarded the Next Generation Indie Book Award for her nonfiction book, Women, Writing, and Soul-Making: Creativity and the Sacred Feminine. The Independent Book Publishing Professionals Group (IBPPG) announced the awards in New York City on May 21.

In addition to her current book, Millin is author of Mary's Way. That book gained attention when a quotation from it was used by Oprah on her show. The quote, "We never touch people so lightly that we do not leave a trace," now boasts over a half million hits on Google.

Millin has also published short fiction, nonfiction, and poetry in various national and international literary journals and magazines, including Thema and the Smithsonian's Native Peoples. She recently released Family Matters: The Power of the Personal Story, an audio memoir workshop.

She holds a BA in English from UC Berkeley and an MA in the psychoneurology of learning and communication disorders from Northwestern University. She has been teaching through ClarityWorks, Inc. for over twelve years. Prior work was undertaken at the Institute of Neurological Sciences,University of Pacific, San Francisco; Department of Rehabilitation, University of Arizona, Tucson, and Cherokee Central Schools, Eastern Band of Cherokee Indians, Cherokee, NC.

You have subscribed to alerts for Peggy Tabor Millin.

You have been added to Peggy Tabor Millin's favorite list.

You can also sign-up to receive email notifications whenever Peggy Tabor Millin releases a new book.