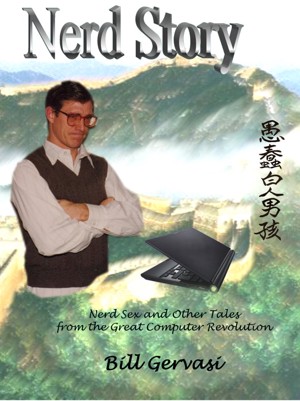 This memoir tells the personal story of a nerd who managed to be in the right place at the right time when the computer industry was in its infancy. The author was one of thousands of bobbleheads who didn’t just watch but also participated in the Great Computer Revolution, playing tricks on each other, eating and drinking together, and having a hell of a time along the way.
Available ebook formats: epub mobi pdf rtf lrf pdb txt html
First 20% Sample: epub mobi (Kindle) lrf more Online Reader
pdb
Price: $0.99 USD
Buy Add to Library Give as a Gift
How gifting works
Create Widget
Tags: humor memoir computer gaming industry
About Bill Gervasi

Bill Gervasi joined Intel in 1976 in the computer systems group manufacturing department, eventually leaving Intel in 1995. During that period, the computer industry changed from computers that filled rooms the size of basketball courts to desktop and laptop form factors in nearly every home in the world.

Since then, Bill specialized in the computer memory technology arena, getting involved in international standards and battles for global dominance for this key part of computer systems. As a chairman of the JEDEC standards organization, he has had a role in paving the memory industry roadmap, and contributed to spreading these standards to the world including engagement with foreign governments. Bill is a public speaker in this niche, generating both excitement and controversy with his aggressive vision for change and progress.

Bill is an incurable practical joker who thrives on making people laugh (or periodically grimace), and his years in the nascent computer industry are polka dotted with gags on unsuspecting co-workers. Bill’s eclectic background also includes years as a published food critic, and fortunately even more years as an aerobics fitness instructor, apparently to burn off the calories consumed while reviewing restaurants. He lives with his wife in Orange County, California.

Bill makes the best coffee in the world, in case you wondered.

You have subscribed to alerts for Bill Gervasi.

You have been added to Bill Gervasi's favorite list.

You can also sign-up to receive email notifications whenever Bill Gervasi releases a new book.