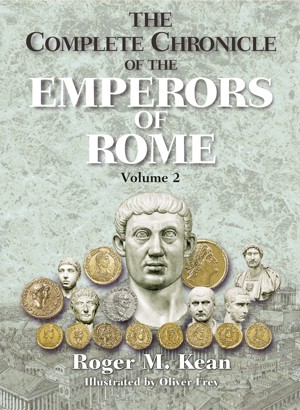 The Complete Chronicle of the Emperors of Rome; Vol. 2

By Roger Kean
Few books before have explored the exploits and notorious antics of Rome's imperial dynasties in such readable detail. Exhaustive research brings to life the fascinating lives of the ancient world's most powerful rulers. This eBook edition of the praised 2005 hardback has web-links to numerous illustrations and maps. Vol.2: from Diocletian to Justinian (AD 285–565). "This book is a must." More
Few books before have explored the exploits, achievements, and notorious antics of ancient Rome's imperial dynasties in such readable detail. This title sets out to describe the lives of every man (and a few women) who aspired to the purple, from Augustus in 27 BC to Justinian I, who died in AD 565—arguably the end of Rome's classical period. Many are familiar with the descendants of Julius Caesar—Augustus, Tiberius, Caligula, and Nero—but how many readers know about Maximinus Thrax, Claudius II Gothicus, or the Gallic Empire of Postumus? Almost 120 emperors, usurpers, pretenders and barbarian rulers of the period are brought vividly to life, illustrated by a mixture of drawings of their busts and coinage, and complemented by specially commissioned maps that clearly outline imperial ambitions and failures. "The Complete Chronicle Of The Emperors Of Rome" provides a history of political, social, military and economic strategies of the world's most powerful and influential empire, and is an essential companion to anyone interested in, or studying, the ancient Romans.

"The Complete Chronicle of the Emperors of Rome" is a unique book. Not only does its scope detail the lives all the Roman emperors until the end of the classical age in the mid-sixth century AD in a highly readable narrative text, but it also provides at least one portrait—coin or bust—of every single one. Usurpers of the throne and would-be aspirants to the purple get a look in too—in words and pictures, as well as many of the major figures’ families. In all, there are 390 illustrations and over 70 color maps charting the changing fortunes of the empire’s frontiers, military campaigns and social situations. Complemented by nine family trees, a major glossary, Latin/English place names and a table of rulers, popes and patriarchs, "The Complete Chronicle of the Emperors of Rome" is destined to be a standard reference to the subject as well as a joyride of a read.

Volume One covers from the end of the Republic to AD 285, the restitution of empire.

Review
Zack Fraker reviewed on July 26, 2010
(no rating)
I'm busy reading Vol. 1, and having skimmed through Book 2, I have to say that I wholeheartedly agree with the following reviews I found on the web for the printed version. By the way, stunning illustration pages full of the emperors et al, and furthermore swathes of colour downloadable maps are accessible through strategically placed links!

If you want a slightly different and more visual take on a fascinating subject, this book is a must!
J. Doherty (Amazon.com)

This book gives great descriptions of each Emperor, (starting with Augustus, and actually going as far as the early Byzantine Period with Justinian) drawing on every source imaginable. It covers every period, a lot of which have very little written about them elsewhere (such as the Third Century). Every imaginable Emperor is in: usurpers, the Emperors of the Gallic Empire; the book even covers the lives of some rulers who were not Emperors, such as the Gothic kings of Italy and leaders of the later Roman Republic.

But what really a attracted me to this book were the wonderful pictures. There are pictures of every emperor, pictures from statues, coins, paintings, and sometimes all of the above. The coins were used so often that I'd recommend anyone with an interest in Roman coins to just look at the pictures. The maps are also great: there are lots of maps, which are always helpful when dealing with places that have changed a lot in two thousand years. Everything is in color and beautiful. One thing that really struck me about the book is that it has the wealth of pictures and the accessibility one might find in book targeted to a younger audience, but the sophistication and enormous amount of detailed information one might expect from a professor of classics. It’s the best of both worlds.
Christopher Bonura (Amazon.com)

Aficionados of the trials, tribulations, big personalities, and exploits of ancient Rome will look hard to find a more definitive but accessible reference guide to this compelling time in global history. The Complete Chronicle of the Emperors of Rome covers not only background history, but also the politics of the time, as well as military and economic strategies, and their social impact. It is an exhaustive coverage of the world’s most powerful and influential empire, and would be at home on the book shelf of anyone studying – or simply interested in – ancient Rome.

Film-maker, journalist Roger Michael Kean has edited historical reference books for many years. Here, his approach is sober, scholarly, and methodical. This chronicle is less about scandal and titillation and more for those with a bent for the encyclopedic and, indeed, accurate.
Heritage-Key.com