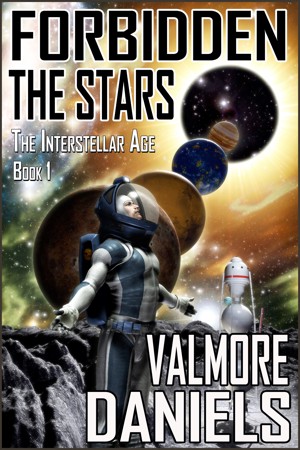 By Valmore Daniels
Rated 4.25/5 based on 4 reviews
An accident in the asteroid belt has left two surveyors dead, the asteroid completely missing. Their son survives, but develops alarming side-effects.

The first mission to Pluto, led by the youngest female astronaut in NASA history, discovers an alien marker. We are not alone!

From a criminal base on Luna, an expatriate launches an offensive.

The race for interstellar space is on! More
At the end of the 21st century, a catastrophic accident in the asteroid belt has left two surveyors dead. There is no trace of their young son, Alex Manez, or of the asteroid itself.

On the outer edge of the solar system, the first manned mission to Pluto, led by the youngest female astronaut in NASA history, has led to an historic discovery: there is a marker left there by an alien race for humankind to find. We are not alone!

While studying the alien marker, it begins to react. Four hours later, the missing asteroid appears in a Plutonian orbit, along with young Alex Manez, who has developed some alarming side-effects from his exposure to the kinetic element they call Kinemet.

From the depths of a criminal empire based on Luna, an expatriate seizes the opportunity to wrest control of outer space, and takes swift action.

The secret to faster-than-light speed is up for grabs, and the race for interstellar space begins!

Valmore Daniels has lived on the coasts of the Atlantic, Pacific, and Arctic Oceans, and dozens of points in between.

His enthusiasm for travel is only surpassed by his passion for telling tall tales.

I wish I could give this book a better rating. Valmore Daniels has put together some interesting concepts.

Unfortunately, he has also written some extremely bad science.

That’s not to say that ALL his science is bad. His physical statistics of asteroids are well done. But...
* He confuses speed with acceleration
* He specifies a travel speed from Pluto to Earth that would only work with infinite acceleration at both planets, but then describes “turnover” and deceleration for half the flight
* He describes a space tug as exerting 6 TRILLION Newtons of force
* He describes Pluto as “the beginning of interstellar space” – a role normally assigned to a point well beyond the Oort cloud where the solar wind no longer increases the density of matter above interstellar levels
* He describes trips from Earth to Pluto that just happen to pass close to Jupiter, Saturn and Neptune, which would require an alignment that’s unlikely to happen in this millennium
* He describes an “artificial gravity” (apparently based on some kind of magnetic force),
* He describes an “Electronic Pulse Signal” that is apparently faster than light,
* The TAHU uses a “gravity convection magneto” to magnify the asteroid’s gravity by a factor of 85.91, “enough to simulate near-Earth gravity”. Given that the asteroid’s unmodified gravity is 0.0000002373 G, that factor would ACTUALLY provide a “gravity” of 0.000020386443 G: a 50 Kilogram human would experience a weight of 1 gram.
* The Dis Pater is described as having “at least thirty-five neutrons”. That’s NOT a super-element. For all known elements, the neutron–proton ratio is 1.5 or less; this would be an element of roughly atomic number 35: such as Bromine.
* The “faces” of the Dis Pater that have glyphs are described as 35 meters by 35 meters. Assuming that each face is one quarter the circumference of the sphere on which it is marked, the spheres are about 44 meters in diameter. The entire structure (including the electron cloud) is described as 168.27 meters in diameter, with a height of 75.91 meters. I’d be hard pressed to fit even thirty-five spheres of that size into that volume.
* He describes the user of lead-lined vests to counteract the lower gravity on the moon. This would only provide exercise for the legs, which would leave the subject with atrophied muscles in most of the body, and skeletal deterioration in the arms, neck and head.
* Despite the availability of “thought-link patches” to interface to computer systems, he has attendees at meetings taking notes with pencil and paper

In addition, I found some of the editing faux pas painful. It SEEMS as though Mr. Daniels had the benefit of some spell checking and grammar checking, but he occasionally creates new words (contemptual for contemptuous), and frequently chooses the wrong homonym (“phase” for “faze”), and occasionally misspells his own neologisms (Kinematic for Kinemetic).

I’m now reading a different author’s novel that is equally complex and innovative. The writing is far clearer; the story line is far easier to follow; the science more reasonable; and the characters have more variety.

I wish I could be more positive about this book – but I can’t.

I picked up a copy of this a few days ago and am enjoying it a lot. The story is full of interesting twists and turns and is very well written. I plan to read the entire trilogy.

With all of the garbage in the world of science fiction that manages to get published and give the entire genre a bad name, it astounds me that a novel as excellent as Valmore Daniels' Forbidden The Stars would have to be self-published. It is a wonderfully constructed novel, full of ambition and great ideas.

The plot in its basic element is reminiscent of Arthur C. Clarke's classic 2001: A Space Odyssey. A group of astronauts set to be the first to visit the dwarf planet Pluto stumble upon an ancient artifact of alien origin, and a stir washes over everyone in the know on Earth.

Meanwhile, a terrible disaster leaves the ten year old son of a pair of astronauts dead on Macklin's Rock, an asteroid in the belt between Mars and Jupiter. Alex Manez somehow survives the disaster, but there is something strange about him in the aftermath.

Forbidden The Stars is a perfect example of when multiple threads in a story can be woven together for excellent effect. It is not a straight space travel romp; it has a much bigger scope than that. There is some political intrigue, some subtle commentary, strong characterization, and an abundance of fun.

What I found most impressive about the book is the way Daniels perfectly shifts between different modes of story telling. It is not straight third-person prose throughout; it includes a section that is the captain of the Pluto mission's journal, several other interludes told via computer logs, and scientific information that gives the novel a unique style that is entirely Daniels' own.

Although this is hard sci-fi, I myself would be useless at trying to assess if the science is good. Frankly, I'm not one to care. This is a brilliantly entertaining novel, and written wonderfully. I plan to buy myself a physical copy soon, and will recommend it to everyone I know who shows even the vaguest interest in science fiction. If you are a Hugo voter, take heed: Valmore Daniels is the real deal. I can't wait for his next novel.

This book is an ambitious story weaving multiple storylines at once. There is Michael Sanderson, President of Canada Corp’s Space Mining Division; Justine Turner, the first female astronaut who pilots Orcus 1 to Pluto; 10 year-old Alex Manez; the criminal base of operations on Luna and the legend of Kulkulkan, the Mayan god of the sun, the oceans, the earth and the sky. Maybe, a little too ambitious.

Alex Manez travels with his parents on a survey mission to the asteroid Macklin’s Rock in the Sol System. This should have been a routine mission, but tragedy strikes and his parents are killed in an explosion. This is no ordinary explosion, but one that will change space exploration for mankind. The asteroid disappears only to reappear four hours later in a Plutonian orbit; the first instance of FTL aided by a mysterious element named Kinemet. Young Alex survives the FTL travel, but his exposure to kinetic element fundamentally changes him. Justine and her crew who were currently serving on a mission to Pluto rescue him. She must abandon her mission on Pluto to bring Alex back to Earth.

I wanted to bond with Alex and everything that he must be feeling, but the author keeps Alex at bay keeping him distant and aloof from every overture that Justine makes to befriend him. We do get to know Justine better, a woman who lost everything in her personal life, because of her unfailing dedication to her career. From the moment Justine rescues Alex, however, she develops an over protectiveness toward the young boy. This is where Mr. Daniels gets it right. I felt that I knew Justine and could understand the reasons why she made the decisions she did in her life.

Not being a scientist, I found myself skipping over many of scientific descriptions and explanations. These don’t interest me, but this is in no way a reflection on Mr. Daniels who obviously did an enormous amount of research for this book. I prefer to know more about people in the story – their motivations, desires, and dreams.

Without giving away any spoilers, there are many events in this book that keep the action moving. All of the storylines came together and I finished the book within a week. It was an enjoyable read and I have no problem recommending this book to fans of science fiction.

I received a review copy from the author.

You have subscribed to Smashwords Alerts new release notifications for Valmore Daniels.

You have been added to Valmore Daniels's favorite list.

You can also sign-up to receive email notifications whenever Valmore Daniels releases a new book.