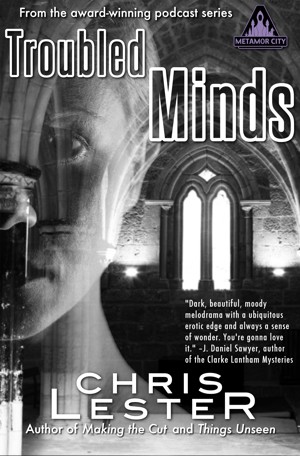 By Chris Lester
Students are dying at St. Theresa's, a school and halfway house for wayward girls on the Street of Metamor City. Abbey Preston is visiting the school, seeking relief from the terrifying visions that have been plaguing her. Is something supernatural at work, or is it all in Abbey's head? A dark, sensual tale of the supernatural set in the world of Metamor City.
Available ebook formats: epub mobi pdf lrf pdb txt html
First 50% Sample: epub mobi (Kindle) lrf more Online Reader
pdb
Price: $2.99 USD
Buy Add to Library Give as a Gift
How gifting works
Create Widget
Tags: erotic mystery ghost succubus telepath ghost hunter dreams and nightmares catholic boarding school metamor city spell tech
About Chris Lester

Chris Lester has been telling stories for about as long as he can remember, and credits a writing contest in elementary school for introducing him to his muse. Trained as a biologist at the University of California-Santa Cruz, he received his master’s degree in 2004. He worked as a science teacher in California for several years, and is now a microbiologist at a drug research organization in Madison, Wisconsin.

As the creator of The Metamor City Podcast (www.metamorcity.com), Chris has twice won the prestigious Parsec Award for excellence in speculative podcast fiction: once in 2009 for Best Long Form Audio Drama and again in 2010 for Best Short Form Audio Drama. In 2015 Chris debuted a new weekly podcast, The Raven and the Writing Desk, where he continues to bring his fiction to the world.

About the Series: Tales of Metamor City

Short stories and novellas in a high-tech urban fantasy world. These stories are collected in the book-length volumes URBAN LEGENDS and DIVINE INTERVENTION, along with several previously-unreleased works.

Reviews of Troubled Minds: A Tale of Metamor City by Chris Lester

You have subscribed to alerts for Chris Lester.

You have been added to Chris Lester's favorite list.

You can also sign-up to receive email notifications whenever Chris Lester releases a new book.