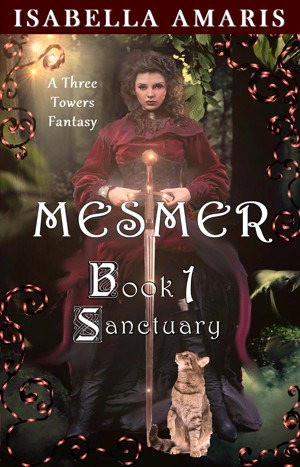 By Isabella Amaris
Rated 4.00/5 based on 1 reviews
When Lea escapes ruthless pursuers in a dark forest, she stumbles upon an enchanted kingdom. But Verlaine isn't the sanctuary it appears to be. And when its magi sovereign refuses to let her leave, Lea must find a way to outwit Gabriel Amarinth’s web of enchantment without betraying who she really is; and before a traitor can destroy all she’s fought to protect in her home kingdom of Lorien. More
A hidden kingdom in a forbidden forest. A realm she can’t escape without the trust of a mage. But trust and magic make complicated allies – when time is running out . . .

When Lea escapes ruthless pursuers within the shadows of a dark forest, she unwittingly stumbles upon an enchanted kingdom. But Verlaine is not the sanctuary it appears to be. And when its magi sovereign refuses to let her leave, her encounters with strange sorcery and malicious fey become the least of Lea's problems.

When she isn't writing high fantasy or YA romantic fantasy, Isabella Amaris can be found busily penning poetry and short stories with elements of fantasy, romance and mystery/suspense.

Lea is found in the Forbidden Forest, beaten and bloody. We are all unsure on what to think since Lea lives a very secluded live, hiding her true identity from those around her. This kind of feels like it was used as a reason to not explain Lea's character fully, I am not quite certain, but there's something off about her mysterious character.

Up until now she has believed there are only two different kingdoms, her kingdom, Lorien of the White Tower, and Makliaven, with the Black Tower, which are both run by non magical humans.

Caleb is the man who rescues Lea who takes her back to his kingdom, hidden deep inside the Forbidden Forest. This is a whole new kingdom, Verlaine, which is home of the Grey tower. She's nursed back to health with a luxurious amount of attention including wardrobes made of the finest materials, and a room that's fit for a king, for her to recover in.

Although the King of Verlaine likes to think she's being kept as a guest or a visitor, Lea feels she's being held prisoner because she is not allowed to leave until the King feels she is not a threat to the people of Verlaine. Thus begins her attempt at hiding her true identity, something she's already so used to doing. She spins a huge web of lies to Caleb. She doesn't plan on opening up to anyone until she knows she is not in danger.

Everything she see's in Verlaine she assumes is due to magic because she doesn't trust her own sight or the appearance they give off. Now she must attempt to escape, without being hunted or followed.

Mesmer is a difficult book to place in a specific genre. I would have to say that it fits in fantasy quite well, with some romantic aspects to the sub plots. It crosses over many different genera's making this a fit for a wide range of people. It's written very well with an easily flowing plot, with no grammar or spelling errors that I found.

I did find it to be quite a lengthily book, but since it captured my attention so quickly, it was hard to notice how long I was reading for. I read most of it in one sitting, so that also helped. It took a long time to get to know the characters, since little pieces of information are given at one time.

I am intrigued enough to read the second book in the series, but I don't know if I'm invested enough. I give this book a 4/5.

You have subscribed to alerts for Isabella Amaris.

You have been added to Isabella Amaris's favorite list.

You can also sign-up to receive email notifications whenever Isabella Amaris releases a new book.