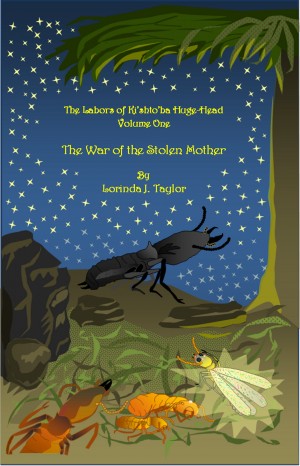 The Labors of Ki'shto'ba Huge-Head: Volume One: The War of the Stolen Mother

By Lorinda J Taylor
Rated 4.67/5 based on 3 reviews
Following the end of “The Termite Queen,” the Champion Ki’shto’ba Huge-Head and the Remembrancer Di’fa’kro’mi set out on an epic quest to reach the sea. In the Champion’s home fortress we learn that Ki’shto’ba has a twin and that he may have been sired by the Sky-King. Later, the Companions visit a fortress that has been at war for nine years with its neighbors ... More
In the 30th century, Earthers make first contact with an intelligent lifeform called the Shshi, which evolved from termites. Following that contact, the Champion of the Shshi, the Warrior Ki’shto’ba Huge-Head, and the bard of the fortress of Lo’ro’ra, Di’fa’kro’mi the Remembrancer, are moved to set off on a quest to reach the sea, the existence of which was unknown to them until the humans came. Joined by two Worker helpers, they head first for Ki’shto’ba’s home fortress of To’wak, where they find that the local Tyrant, who has long feared Ki’shto’ba’s power, is holding citizens of Lo’ro’ra prisoner. We learn of our Champion’s hatching (it has a twin) and of a Seer’s revelations that Ki’shto’ba was sired by the Sky-King and that it can be killed only under unusual circumstances. Ki’shto’ba undertakes to ransom the prisoners by agreeing to leave To’wak and perform twelve wonders before returning, thus freeing the Tyrant from the fate of being killed by its more powerful sibling.
The Companions then set off again, joined by the twin A’zhu’lo and by a fifth Companion, an outcast Worker named Za’dut, who is an outrageous trickster and thief. Their journey takes them to the fortress of Thel’or’ei, which has been at war with its neighbors for nine years over possession of a river ford. Ki’shto’ba is duped into supporting Thel’or’ei, which in fact has committed an unspeakable crime against the Shshi Way of Life. When Ki’shto’ba learns of this crime, it renounces its oath and goes over to the other side. There, with the help of Za’dut the trickster, plots are devised to steal Thel’or’ei’s protective talisman and to breach its impregnable walls. But with a crime so heinous and with flawed local Champions who are either craven, cunning, or willful and unpredictable, it is unlikely the outcome can be favorable …
Available ebook formats: epub mobi pdf rtf lrf pdb txt html
First 25% Sample: epub mobi (Kindle) lrf more Online Reader
pdb
Price: $2.99 USD
Buy Add to Library Give as a Gift
How gifting works
Create Widget
Tags: greek mythology
About Lorinda J Taylor

Reviews of The Labors of Ki'shto'ba Huge-Head: Volume One: The War of the Stolen Mother by Lorinda J Taylor

This is an absorbing adventure story with a unique premise: intelligent termites on a planet far from ours, whose experiences, emotions, and interactions are as engaging as those of human characters. I admit I hesitated to read this series, even though I've read and enjoyed other books by Lorinda J. Taylor. The idea of spending reading time with huge fictional insects was off-putting. I got over this by reading The Termite Queen, a pair of books set on that planet with human as well as termite characters. In fact, because this first of the Ki'shto'ba books lacks any human characters (although some are mentioned peripherally), the reader doesn't see the termites through human eyes. Relating to them purely as personalities, I almost forgot they were insects, except when references were made to body parts and anatomy not possessed by humans. Taylor uses entomological terms for most of these, so readers have to get used to words such as "palps," "clypeus," and "hemolymph." This makes sense because it avoids a whole lot of invented words that would be just as unfamiliar but couldn't be easily looked up in common sources. That reminds me of another aspect of this fascinating book -- Taylor's invented termite language. It's not just random "alien" sounding terms; it's every bit as structured as Tolkien's languages. Meanings of words are supplied within the text, and after a while I was able to discern patterns, which enriched the reading experience.
Taylor must have done an enormous amount of research on terrestrial termites to represent their societies, castes, reproduction, diet, and other aspects. To this she has added intelligence equivalent to that of humans and a consequent technology and culture, but she doesn't cross the line into anthropomorphism. The characters aren't humans in termite suits; reading about them was a learning experience I probably wouldn't have had otherwise.
The plot involves a small group of individuals undertaking a great journey and the adventures they encounter. The primary one involves a lengthy war between different communities, complete with scenes of combat, trickery, and destruction. Eventually the reader will recognize familiar themes and character types, and a mental light bulb will light up. That's only one of the happy surprises within this clever and entertaining book. I'm definitely looking forward to reading the rest of the books in this series.

Having read both volumes of The Termite Queen series, I was looking forward to getting started into this second series about Ki'shto'ba Huge-Head, his smaller twin A'zhu'lo, Di'fa'kro'mi the Remembrancer, plus others on their great adventure towards the sea and the twelve wonders that Ki'shto'ba had to perform.

I was not disappointed!

This is a wonderful start to an epic series in the style of Jason and the Argonauts (minus ship), combined with heroic feats in combat and a tricky little Loki type worker called Za'dut to spice things up and ...... but that's enough, I refuse to give any more clues away except to say I thoroughly enjoyed it and looking forward to the next volume.

Don't be deterred by the strangely pronounced names or conlan (constructed language) terminology, it is well worth getting used to and added to my admiration of the author's ability to interject it in such a way that it added to, rather than detracted from, the story

This is the first volume in a series following the labors of Ki'shto'ba Huge-Head, a warrior of the Shshi race of intelligent termite-like people. It is set on an alien (to humans) world described in an earlier multi-volume novel covering the discovery of the world by humans. In the first book, the point of view is primarily that of Kaitrin Oliva, a human linguistic anthropologist who decodes the Shshi language.

This next multi-volume novel has no humans, only the termites. It's an epic tale told as if narrator Di'fa'kro'mi the Remembrancer is dictating it to his scribe long after the events of the story. This is an effective means of narration because it allows for asides and personal thoughts of Di'fa'kro'mi about the story. I found it amusing when Di'fa comments how he used a bit of literary trickery to describe events happening elsewhere. That is, Di'fa invents a point of view shift. Clever of the author to come right out with it before I made a note about the "POV SHIFT!" Ms. Taylor uses multiple literary devices to get around some of the obstacles a termite might have recording a story for others to read, not just listen to in the oral tradition of the Remembrancers.

This novel is steeped in earth mythos from the role of Di'fa as the Homer of the Shshi to the obvious comparison of Ki'sh to both Ulysses and Hercules of Greek myth, the war with Troy, and a lot of other references I probably missed.

It's a really long first volume, but I'm almost getting used to Ms. Taylor's monolithic multi-volume novels. You certainly get plenty of words for your 99 cents (the price may have changed) and all of them quite necessary to the story. I will always have a problem with the names and the other con-lang (constructed language) features, but this one is footnoted for the most part. As for the names, there's a handy cast of characters and places at the beginning of the book.

What did I love about the book? Lots. The epic sweep of the story (and this is only the first volume of Ki'shto'ba's travels). The warrior is as knightly and honorable as any of King Arthur's court. The brotherly love between Ki'shto'ba and his twin brother, A'zhu'lo (highly unusual in the termite world) is touching and real. I quite enjoyed the antics of Za'dut the trickster outcast who just can't keep his claws off others' property. While playing the clown, he turns out to be quite clever and, at his heart, cares as much for the companions as any of the others.

I think what I want to say is that this novel is deeply and touchingly human although the termite practices are entirely unhuman. The concepts of honor, love, grief, fear, jubilation, caring are all there and I truly believed them.

Well done, very well written, squeaky clean grammar and spelling. Ms. Taylor has made me a fan of the termites even if I can't always remember who's who with the secondary characters. I didn't have a problem remembering the companions who travel on this epic journey.