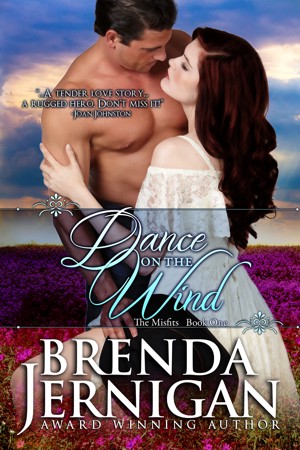 Book One – The Misfit Series - Thunder, a Cheyenne scout, agrees to guide Brandy and a ragtag family to Fort Laramie he isn’t prepared for the passion that flares on the trail West. A bargain made in haste. A destiny sealed by a kiss. More
A bargain made in haste. Desperate but determined, lovely Brandy answers an advertisement for a mail order bride, hoping to build a new life out West for herself and the five orphans she’s taken under her wing. She needs a guide to reach Fort Laramie by wagon train and turns to Thunder, a Cheyenne scout, for help. When he curtly refuses, Brandy is undaunted. And when he’s jailed after a gunfight she makes a devil’s bargain: he gets his freedom and she gets a guide.

Thunder has learned the hard way that prejudice runs deep for half-breeds. Now, his only desire is to live among the Cheyenne people. He doesn’t want the temptation beautiful Brandy offers and the wild passion that explodes between them only hardens his resolve to avoid what he cannot have: another man’s soon-to-be-wife. Can he truly walk away from Brandy and the ragtag family? Or has his destiny been sealed by a kiss.
Available ebook formats: epub mobi pdf rtf lrf pdb txt html
First 20% Sample: mobi (Kindle) lrf pdb Online Reader
Price: $0.99 USD
Buy Add to Library Give as a Gift
How gifting works
Create Widget
Tags: adventure inspirational sexy love story historical romance indians cowboys western romance cheyenne wagon trains fort laramie scout western series
About Brenda Jernigan

Also in Series: The Misfits

You have subscribed to alerts for Brenda Jernigan.