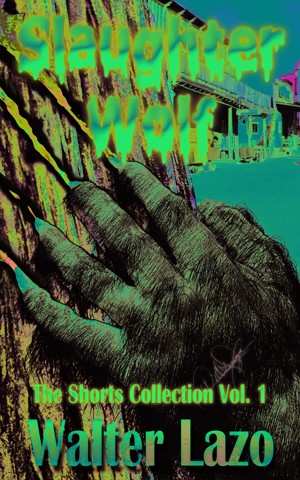 By Walter Lazo
Rated 4.00/5 based on 3 reviews
Three fierce werewolf hunters corner their prey outside of a ravaged village only to find the beast does not flee from them but calmly waits. The werewolf hungers, but what he hungers for they do not understand. Soon they will learn a lesson about the nature of evil. If they survive, they may well wish they hadn’t.
Download: epub mobi (Kindle) pdf more Online Reader
rtf lrf pdb txt
Price: Free! USD
Add to Library
Create Widget
Tags: horror demon fantasy werewolf
About Walter Lazo

“Our free short stories are intended as a doorway to our more mature premium works. Their purpose is to showcase the author’s writing style and use of evocative imagery. Although these are his earlier works—he has gotten much better since—they serve as a nice introduction to his thematic concerns as well as to his belief that a story has to be believed in to be effective. Therefore, what he presents in these stories are situations and the reactions of characters within those situations.”

He enjoys writing horror and science fiction stories with an occasional martial arts story thrown in for good measure. He is currently obsessed with the short story form and hopes that it will make a comeback in popularity. As an adult he has tried to create his own mythos, writing about the Demon World and other creatures that torment men’s dreams.

He is a longtime fan of Stephen King and of the works of J.R.R. Tolkien.

Our Forums Are Now OPEN!
Join us at: http://werewolfwinter.com/forum/

I tend not to be drawn towards horror stories featuring vampires, zombies or werewolves because there are so many of them about and I prefer to experience more original types of menace. That said, I was pleasantly surprised by this story, which in terms of plot and execution I found to be a big improvement on the other works I've read from Walter Lazo. The writing is generally very good and although the story concerns a werewolf, that element is really just a backdrop to a more human - and more rewarding - tale of good and evil. Okay, so there are a few minor errors (eg "we approached the shirtless man wearily" when I presume it should be 'warily') and there's a tendency to list details rather than blend them in. However the characters are believable, descriptions generally good, the vocabulary varied and imaginative, so all round a very enjoyable read.

This is an engaging short concerning how to kill a werewolf, which subverts and complements the usual old ideas. Some amount of thought clearly went in to it, and the writing is very good. SLAUGHTER WOLF seems like it may be an excerpt from a longer work, but stands alone quite well.

All in all, an enjoyable short read, and a very well presented e-book.

A gripping story as three werewolf hunters tackle the beast. The ending was possibly influenced by An "American Werewolf In London" but on a whole the story was still very original.

You have subscribed to alerts for Walter Lazo.

You have been added to Walter Lazo's favorite list.

You can also sign-up to receive email notifications whenever Walter Lazo releases a new book.