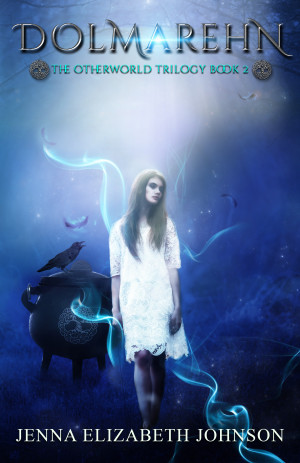 By Jenna Elizabeth Johnson
Rated 4.00/5 based on 3 reviews
A year ago, Meghan Elam learned that she was Faelorehn, a being of the Otherworld. Immortal. Now she must juggle her life in the mortal world with the one she has started to build in the Otherworld. But keeping her identity secret from her friends and family while trying to avoid a wrathful Celtic goddess is no easy task. Luckily, she has the intriguing Cade MacRoich to help her along the way. More
Magical realms, Celtic warriors, and faerie glamour: Percy Jackson meets The Mortal Instruments.

“An appealing blend of awkward teen and powerful Fae. I love the passion, mystery and adventure the heroine experiences.” ★★★★★

“Do you trust me Meghan?”

His voice was soft, almost pleading. I swallowed and tried hard to discern his expression in the dark. The paltry amount of light reaching this far into the small cavern glinted off his eyes, giving him the appearance of a demon trying to tempt me into doing something evil.

He gave my hand a quick squeeze, and then I was pulled forward into the icy abyss that loomed before us . . .

A year ago, Meghan Elam learned that she was Faelorehn, a being of the Otherworld. Immortal. Now she must juggle her life in the mortal world with the one she has started to build in the Otherworld. However, keeping her identity secret from her friends and family while trying to avoid a wrathful Celtic goddess is no easy task.

With the help of the intriguing Cade MacRoich, Meghan will learn that not only does she come from a place full of magic and wonder but that she, too, is far more powerful than she ever thought possible.
Available ebook formats: epub mobi pdf lrf pdb txt html
First 20% Sample: epub mobi (Kindle) lrf more Online Reader
pdb
Price: $0.99 USD
Buy Add to Library Give as a Gift
How gifting works
Create Widget
Tags: twilight otherworld celtic mythology mortal instruments faery romance fae paranormal romance teen and young adult paranormal romance shadowhunters arroyo grande a court of thorns and roses
About Jenna Elizabeth Johnson 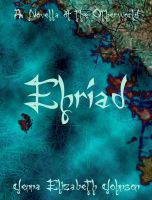 I’ve been sitting here starting at the computer screen for the last 30 minutes trying to figure out how to review this book. I loved it; I like it, and in parts, it drove me absolutely crazy. I’m just so torn.

What I loved: Cade! *Sigh* He is sweet, mysterious and has an edge of danger. Oh, and I can’t forget to mention that he is a complete hottie. Add in some magic and you’ve got yourself the perfect love interest for the lead, Meghan. His character really grew from the first book, and I cannot wait to see what happens with him in next one.

There was a lot more action in this part of the series, and it kept the story moving along at a nice pace. The descriptions that went along with the action were awesome, and I could see everything as if I was standing right there with the characters.

What I liked: The Dagda brought a few smiles to my face, and I’m sure he will become one of my favorite characters as the series goes on. He has a wonderful charisma to him, and he really livened up the story when things got too serious.

I also liked the sparks of romance between Cade and Meghan. The only thing that kept this from the Love list was Meghan’s constant internalizing about waiting for the “right time." She’s a teenager, but yet, there was no impulsive teenager behavior. Nevertheless, I giggled a few times and smiled and could completely picture what Cade’s kiss would be like. :)

What drove me crazy: There were three things that really had me gritting my teeth. The first and most frustrating was all the inconsistencies in the story. I found myself having to go back and reread full chapters trying to figure out what I had missed only to find that I didn’t miss anything. What I thought was missing just hadn’t been written. For example, in one scene the characters woke up a dawn, traveled two hours, and when they arrived at their destination two hours later it was sunset. What happened to the rest of the day?

The next was the chapter titles. There was one chapter near the end in particular that I actually had tears in my eyes until I flipped the page and the title gave away exactly what was going to happen next. It took away the suspense, and I found myself skimming the pages instead of absorbing to story.

The last thing was Meghan’s character. She grew a bit from the first book, but I still really couldn’t connect with her. She thought so much but never really acted on the thoughts until it was too late. For a teenage girl, this seems unrealistic. However, at the very end she came out of her shell and showed promise for the next book.

My overall thoughts: Even with the draw backs, I still enjoyed the story. I can see the potential, and the second book was definitely better than the first. I’m looking forward to the next book in the series and cannot wait to see what happens.

This is the second installment in the Otherworld series by Jenna Elizabeth Johnson. I had forgotten how much I get caught up in this series! I just love these characters! When I sat down with this book.....IT ALL CAME BACK TO ME. I was hooked once again and was regretful every time I had to put this book down.

This book picks up where we left Meghan after Faelorehn. She has been healing and recouping over the summer after her run in with the Morrigan. While Meghan has been healing she has been a bit reclusive and Cade has been MIA, which has caused her to become a little obsessive over him. But hey lets face it I would obsess over him too!

Meghan gains more exposure to the Fae part of her origin thanks to Cade when he finally makes an appearance. He gifts her with a Merlin for her birthday so that she has her own spirit guide and he can then take Fergus with him back to Elie. She learns to care for the little bird and the bird becomes her protector. Meghan goes to Eile on three occasions over the course of the novel and Meghan begins to learn more about herself, her magic and her origins. She also learns a little bit more about the mysterious Cade. I admit I fell in love with Cade. I didn't think I could like him any more than I already did after Faelorehn, but what do you know I was wrong.

In terms of pacing, while the last book worked to set things up this novel has a lot more action and a lot more going on. We learn a lot more about the characters and their world of Eile.The bulk of the action takes place in the Otherworld while the mortal world is relatively calm. Don't mistake me, I don't consider Meghans encounters with the fae creatures in the mortal world to be calm by any means, but the amount of action between the Otherworld and the mortal world are very different. Well I'm not giving out the details because I want to leave that to the reader to discover, but the ending left me anxious and waiting impatiently for the last installment in the series. I can't wait to join these characters again and to see just where things are going to go.

This is the second time I couldn't wait to read a book, and couldn't put the book down, but then I get upset that it's over, and now I know I will have to wait again until I can catch up with Meghan and Cade.

I read a lot of the YA books because my students read them, and I like to have some idea of the stories that are catching their interests. This is a series that I will mention to the students. The Celtic lore, and the fantasy aspects of the story make the books enjoyable and intriguing.

You have subscribed to alerts for Jenna Elizabeth Johnson.