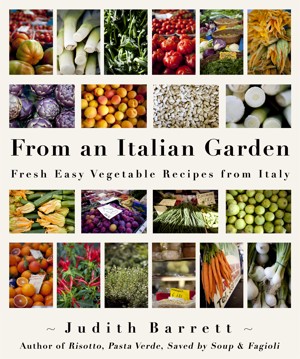 From an Italian Garden


Judith Barrett is a well-known food writer and cookbook author. She was a regular contributor to The Boston Globe food pages for twelve years. In addition, her articles have appeared in The New York Times, The New York Times Sunday Magazine, The Washington Post, Food Arts, Self, Eating Well, and many other publications.

Her books include the definitive cookbook on risotto, RISOTTO; as well as FROM AN ITALIAN GARDEN; PASTA VERDE; RISOTTO RISOTTI; SAVED BY SOUP, which was nominated for both a James Beard award and an IACP award; and now FAGIOLI: THE BEAN CUISINE OF ITALY.

She has traveled extensively in Italy, studied Italian cooking in Italy with Giuliano Bugialli, and, since she was a young child has loved and appreciated Italian cuisine. She grew up outside of New York City, attended college in New England, and now lives in Cambridge, Massachusetts with her husband. She has two daughters.

You have subscribed to alerts for Judith Barrett.

You have been added to Judith Barrett's favorite list.

You can also sign-up to receive email notifications whenever Judith Barrett releases a new book.