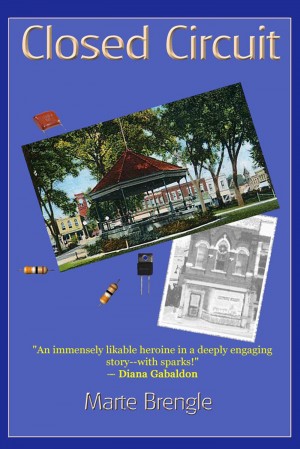 Rated 4.67/5 based on 3 reviews
Ruth Peyton has all she needs--her own business, a mentor, a real home town. And then, one hot summer day, everything changes. Who are these strangers who have bought Ruth’s building as the first step in their mysterious plan? And now someone from her past is determined to draw her back into a painful relationship she thought she'd put behind her. Can she find the answers before it's too late?
Available ebook formats: epub mobi pdf lrf pdb txt html
First 20% Sample: epub mobi (Kindle) lrf more Online Reader
pdb
Price: $2.95 USD
Buy Add to Library Give as a Gift
How gifting works
Create Widget
Tags: contemporary fiction closed circuit marte brengle iowa towns
About Marte Brengle

Marte Brengle comes from a long line of teachers, preachers, and writers. Born at the beginning of the Fifties, she entered her teen years as the Beatles conquered the world, graduated from high school into the tumultuous, catastrophic world of 1968, and graduated from college just when Nixon thought he had it all.

This produced a distinctive world view that falls into no set category.

In the tradition of Maeve Binchy and Rosamunde Pilcher, she creates novels full of warmly appealing characters, who must come to terms with themselves, their surroundings and their pasts.

A good, fun read. The story moves right along and made me eager to continue reading. Lots of mysteries that are resolved by the end. I look forward to the next book in the series.

Small town stories make for in-depth novels and Marte Brengle’s debut Closed Circuit is no exception.
Lyric, Iowa and the electronics repair shop on the northwest corner of the town square set the stage for mystery, drama and romance. A sticky hot summer has barely begun when Ruth Peyton discovers that her landlord has sold the building where she lives and works – to Adam Tallbott, someone from her past that she’d rather not speak to ever again.
Not only that, but there are rumours flying that he’s bought other buildings around town, and is planning to raze them all. Or build a supermarket. Or dig for minerals. Gossip runs wild and all too soon Ruth finds herself in the thick of it, as Adam tries to win his way back into her life.
Can she play him long enough to find out what he’s really up to – without losing her heart to him in the process?
Brengle has created an entire cast of characters for Lyric who soon become as familiar to the reader as their own friends, and the story is told in an omniscient voice that allows their individual traits to shine through. There’s Chet, the kind curmudgeon who works with Ruth – determined to solve his own mystery in the town – Jodi, femme fatale, who gets her comeuppance the first time in one hilarious scene involving a too-short skirt – and a few shady characters running – or trying to run – a pot growing operation. Plus Grace, Eleanor, Eddie...
The next book in the series is called The Dutchman’s Puzzle and will continue the story of Lyric and its inhabitants – I can’t wait!

I loved the characters I was supposed to. The story line is believable and it is a good characterization of life in small-town Iowa. The imagery brought back forgotten memories. This is a fun story. Looking forward to a sequel.

You have subscribed to Smashwords Alerts new release notifications for Marte Brengle.

You have been added to Marte Brengle's favorite list.

You can also sign-up to receive email notifications whenever Marte Brengle releases a new book.