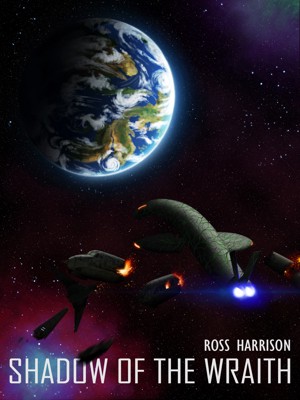 Shadow of the Wraith

By Ross Harrison
Rated 5.00/5 based on 1 review
A ghost ship terrorises the galaxy. Can a team of inept soldiers exorcise the stars and bring an end to an even greater threat? More
- The debut standalone novel of the NEXUS universe -

It sounds like a simple assignment: track down the mysterious Star Wraith and put an end to its rampage.

But when Travis Archer and his team of inept soldiers find themselves the most wanted people in the galaxy – hounded by assassins, terrorists and their own military – they realise the Wraith is just a symptom of a much larger problem...

Finding war raging between one army intent on destroying an entire species and another that will destroy the galaxy, Travis must put aside his fears and his past to uncover the truth behind it all. To become the hero he's always imagined.
Download: epub mobi (Kindle) pdf more Online Reader
lrf pdb txt
Price: Free! USD
Add to Library
Create Widget
Tags: assassin android space opera action adventure sci fi bounty hunter science fantasy
About Ross Harrison

About the Series: NEXUS

NEXUS is a non-linear science-fantasy/space opera series in which every book has some kind of connection to the others. Although best read in order for more background and understanding, only Ghosts of the Fallen is a direct sequel.

Reviews of Shadow of the Wraith by Ross Harrison

Travis Archer is a freelance bounty hunter who accepts an official assignment to hunt down and destroy the Star Wraith, a powerful but apparently unmanned ship with the nasty habit of appearing out of nowhere and destroying ships. Although Travis and his crew are the focus of the story, the narrative cuts to other scenes in a cinematic fashion. The more fascinating scenes of these reveal glimpses of a shadowy villain called Baorshraak, whose goals and motivations remain shrouded in mystery even as he appears to be the one pulling the strings.

Harrison writes with a distinct attitude that is very aware of the genre his story takes place in. References are made to the clichés of space opera, which he acknowledges and makes fun of even as he unapologetically takes advantage of them. Many ideas in this book are decidedly familiar--starfleets, space cowboys, humanoid aliens--but they are used well. There is a dry sense of humor that radiates not only from the characters but the narrative itself, as though it isn't taking itself too seriously.

Although this attitude makes for entertaining commentary, there are a few moments where it seems somewhat intrusive--as though it's the author speaking and not the character. Nevertheless, it's what adds an extra bit of sparkle to the already dynamic plot, which carries the reader to unexpected corners of this galaxy.

Overall, Shadow of the Wraith is a smartly plotted and entertaining space adventure that takes the reader on many twists and turns--the direction the story goes in is quite different from what is expected. But in the end, it's really the characters' voices--and Harrison's--that make it memorable. I ended up enjoying it so much that I suffered from two nights in a row of Star Wraith Insomnia--the inability to sleep due to the fact that I had to keep reading.

[This is a condensed version of the full-length review on my blog: Zigzag Timeline]

You have subscribed to Smashwords Alerts new release notifications for Ross Harrison.