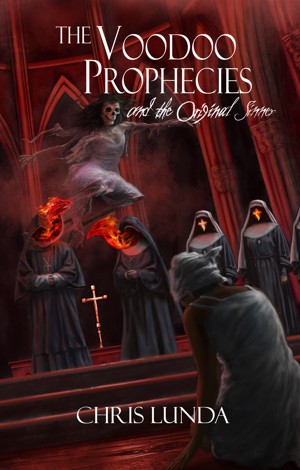 The Voodoo Prophecies and the Original Sinner

By Chris Lunda
New Orleans - Summer 1975 - Coming of age six teens are trapped inside a Haitian prophecy. From 17th century Rome, a secret order of Ursuline nuns, survivors of history's largest mass possession, join together with the The Vampires of the Cross and Voodoo Queen Marie Laveau to battle the immortal witch and New Orleans mass murderer Madame LaLaurie who seeks the release of Satan’s first born son. More
1632 –The mass possessions of Loudun, France signal the beginning of hell’s revenge. Pope Urban VIII orders construction of the Capuchin Crypt, to hold a small congregation of survivors, known simply as - The Eight of Loudun. Forged from the skeletal remains of thousands of perished monks, the grotesque structure allows the Church to observe the afflicted souls like demonic laboratory animals.

The survivors, a Capuchin priest and seven Ursuline nuns, are intriguing to the Church. Unaffected by the holy rite of exorcism their souls instead have been altered by a book of conjures ascribed to King Solomon. The book allows them a strange power over the fiends that still inhabit their bodies. It is as if the priest and the nuns have themselves possessed the demons.

The Bishop of Cremona has ordained capable caretakers for these eight. The Vampiri De Croce, known to very few are an order of six holy vampires that provide for the most unusual sustenance needs shared by the nuns and priest.

Struggling to perfect their gifts, these odd servants of the Church remain hidden away until that day in February of 1727, when the immortal alchemist Count St. Germain visits the crypt. He alerts the Catholics to a prophecy predicting the return of Satan’s first-born son in the new world.

The West African prophecy of 141 A.D. also foretold by the apostle Paul is sacred to the Church but remains cloaked in secrecy. Together Count St. Germain, the Eight of Loudun and their caretakers voyage to New Orleans, the capital of French Louisiana to join Voodoo seers and the six young chosen ones. Their predestined clash with a dark sorceress and malevolent demons is only the beginning of their apocalyptic journey to fulfill the Voodoo Prophecies.

Charles Christopher Lunda was born on June 24th, 1963 in Houston Texas, the first child of Charles and Patsy Lunda. Growing up in the suburbs of New Orleans from the age of one through high school, he later attended Baylor University where he studied Theater, Journalism and English Literature. Following Baylor he continued his studies at North Texas State University where he focused on the study of playwriting and screenwriting collaborating on several stage adaptations. It is this training that makes his novels intensely cinematic.

After university he served in the United States Coast Guard aboard a 378 foot high endurance cutter spending time in the Bering Sea, Gulf of Alaska and the South Pacific. Having developed a love for the sea, his corporate life was spent as a marine surveyor which afforded him the opportunity to travel extensively visiting 26 countries. He has lived in New Orleans, Dallas, New York, Los Angeles, Atlanta and Singapore. Now residing in the small beach community of Gulf Shores, Alabama with his wife Christina Kourt, he has ventured away from his playwriting past and ventured into the wonderful world of novels. Represented by an agent and published by the independent imprint East Village Press his current project The Voodoo Prophecies has been well received and he is currently working on Book 2 of the trilogy 'The Voodoo Prophecies and the Rise of the Nephilim.' - written by Joyce Howard

You have subscribed to alerts for Chris Lunda.

You have been added to Chris Lunda's favorite list.

You can also sign-up to receive email notifications whenever Chris Lunda releases a new book.