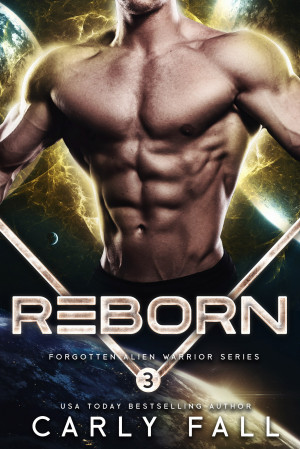 Hudson hides the terrible pain he’s suffered for many years behind a smile and fine clothing. As he fights his internal demons, he joins his fellow warriors in waging war on the evil from their planet that has been let loose on Earth.

Beverly Devlone was a highly respected doctor, until tragedy hit and a drug addiction destroyed her career and reputation. As a lonely woman fresh out of rehab, she’s now uncertain of her place in the world, what her purpose is, and where she belongs.

Reviews of Reborn by Carly Fall

This was first published on my blog Lecture toute une Aventure

My opinion:
A really good book but so far my least favourite in the series. This book is to me the more violent one or to be more precise, in precedent books we got some gruesome report on colonist’s crimes but we didn’t really assisted in one like we do in Reborn. Oh don’t worry it’s well written, well thought but I couldn’t connect with the characters as much as I hoped I would and I did found this one a little too predictable for me.

Hudson seemed to be a pillar of the saviours team while he is in fact one that suffer the most, not only from his past on SR44, but also from event taking place on Earth. He never got over Abby’s Mother, Iris, rejection and that’s mining him. Male from their planet have a really strong link to their mate and if the mate goes missing they can become crazy and suffer physically….i can understand that of course but then I had some little difficulty as why the other didn’t understand his situation and was left to himself. There is different kinds of love true but with what happen it makes me think he fantasized himself in love with Iris when he was only fond of her and it’s kind of strange after all his time on earth he didn’t see that. I guess it’s also a little for that I had difficulties to accept how he acted with Beverly.

Beverly is a kind soul she just doesn’t have enough inner strength, more than she thinks but a lot less than Faith for example. As a doctor she wants to help, to save live and thus when she failed to save the one important to her and then had an accident it crushed her. However, it’s also what made her meet the saviours….like it was her destiny. In her medical mode she is really proficient and determined, she immediately see that Hudson is hiding more than he let on and that he can’t be trusted alone…sometimes it takes a broken soul to recognize another , anyway it’s her personal experience that gives her what she need to reach to Hudson and find the right words. They are saving each other but at first she still doesn’t fight for herself, to make him accept her no and that frustrated me.

The action is strong is this one and I guessed the identity of the colonist after the first pages, it was well done but it was still evident for me. Then after the event in “ Finding My faith” it was impossible not to expect trouble… there are here just even stronger I mean…he even tell Hudson more is to come and as reader you know what he has done but the saviours done and I really hope they are ready…. I guess if I liked this one less it’s also linked to how I consider SR44….i mean they throw their citizens on a mission but without any contact allowed and no back up and now we see with no information either… this could have been prevented if the chiefs had given them a list with the culprits’ name… but no they just have to find the twelve who escaped… no more explanation just a set of rules really strong, cruel even. In this book I resented this even more because of Hudson…. In a sense they are the sacrificial lambs.

The romance is cute but it missed the deepness from the other books…they need to work on their connection in a sense after attraction , learning about each other past they must create something more. I could love this couple but so far it’s just appreciation.

Now on a technical level, this is the 3rd book in the series and if it could works as stand alone.. I wouldn’t recommend it to be read out of order. Yes the author give a little background from the universes so you are not lost but this book more than the precedent one is set in a line of events better to be followed so I really recommend you to start with book 1 first and then follow the rest in order to understand the saviours and get the story in a whole because the stakes are growing after each book and the suspense is mounting ( but no real cliffhanger no).

A good book for lover of paranormal romance with aliens.