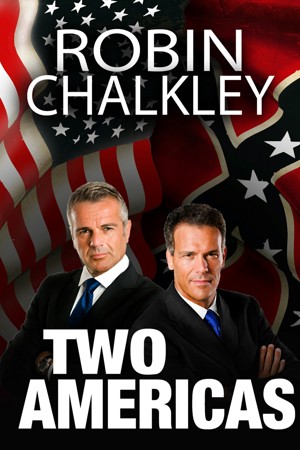 By Robin Chalkley
The First Lady of the Confederacy is assassinated as she dedicates a new warship. A tragedy, but not unexpected between enemies.

Except the Confederate vessel is an aircraft carrier. The year is 2013.

And the assassin is a U.S. terrorist.

Now Chase Randolph, head of the Confederate Bureau of Investigation, must solve the crime before war fever engulfs the two Americas in a Second Civil War. More
The First Lady of the Confederate States of America is assassinated as she dedicates a new warship at the Hampton Roads Shipyard. A tragedy, but not unexpected between enemies.

Except the Confederate vessel is an aircraft carrier. The year is 2013.

And the assassin is a U.S. terrorist.

By taking advantage of its early motivation and superior organization, the South won the Civil War in 1862. Today, the two Americas – the United States and the Confederate States – coexist uneasily. The United States has never recognized the sovereignty of the Confederacy, and still claims the South as its territory. Many people in both countries still carry hate and bitterness from what has become a century and a half of violence. America vs. America begins with the murder of the First Lady of the Confederacy, a much-beloved figure. War fever spreads quickly through a stunned and grieving Confederacy.

Chase Randolph is the Director of the Confederate Bureau of Investigation. He is in a race against time to find the killers and quell a political uprising at home before the continent becomes embroiled in a devastating war.

Two Americas is a fast-paced, thriller packed with tense action. It will appeal to readers of such authors as Vince Flynn, Harlan Coben, and David Baldacci.

Robin Chalkley has been writing copy for more than 30 years, having worked in a number of regional advertising agencies as well as currently in his own freelance business. In 2003 he was honored by the Advertising Federation of the Roanoke Valley with its prestigious Silver Medal.

Robin is the creator and primary writer for two websites: http://www.GreatAmericanThings.net and http://CaribbeanHoneymoonTravel.com. He has completed one novel, and is now working on Torch, a new novel about an ex-con who tries to clear his former cellmate. In 2011, he earned first place in the Winston-Salem Writers Flash Fiction Contest; in 2012 he again won first place in Flash Fiction and second place in the Short Story category.

A native of Newport News, Virginia, he is a 1973 graduate of Virginia Tech. After living in Roanoke, Virginia for most of his adult life, he moved to his current home near Winston-Salem, North Carolina in 2002. He has two wonderful sons, and is very happily married to his wife, Jeannie.

You have subscribed to alerts for Robin Chalkley.

You have been added to Robin Chalkley's favorite list.

You can also sign-up to receive email notifications whenever Robin Chalkley releases a new book.