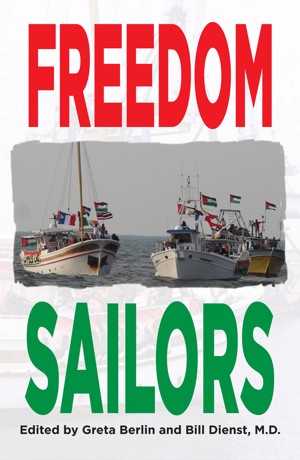 In a little over two years, we raised the money to purchase two dilapidated fishing boats stored in secret ports in Greece, collected 44 passengers, crew and journalists, aged 22 to 81 and chose Cyprus as our embarkation point.

People who weren't there or weren't close to us may not realize just how isolated we were once we finally set sail to Gaza on the late morning of August 22, 2008; over 33 hours on the sea, no internet, and only a couple of satellite phones which were blocked by the Israelis after night set in.

That first voyage in 2008 achieved exactly what we hoped it would. We opened the door just a bit, proving it could be done. None of the later actions, by land or by sea, would have been possible or even attempted if we hadn't climbed into two ramshackle boats with nothing but our determination and our naiveté holding us together.

Our story of how we came together, raised the necessary money, and pulled off the successful voyage, despite the prying eyes of Israel’s intelligence service, the Mossad, is often riveting.

More to the point, it helps us understand the importance of taking a stand when you see an injustice rather than becoming complicit through silence.

"Freedom Sailors is a powerful record of the political and humanitarian activity of some of the best humans we are ever likely to meet, or learn about. These women and men leave us with the most wonderful of questions: Is human courage and sacrifice the same as love? And is it this love for ourselves collectively, as humans, that has a chance of saving us and our planet? To read this book is to see what we can be like, in the face of imminent danger."

"A riveting account of one of the great moments in the history of non-violent resistance: breaking the criminal and sadistic siege of Gaza, and letting the prisoners know that at least some in the outside world care about them and their grim fate. The Free Gaza flotillas are truly an inspiration."

This is a story about courage and determination as told by forty-three human rights activists who founded, organized and purchased boats to go to Gaza. On August 23, 2008, they made history by landing two small Greek fishing boats, the Free Gaza and the Liberty, in Gaza. They were the first internationals to land there in 41 years.

Full disclosure: I was part of the Gaza Freedom March in 2010 and saw Gaza with my own eyes, and was in Cairo in January 2011 with a CodePink delegation trying to get into Gaza again. So I clearly have opinions of my own.
This is a superb book; if it was possible to give it a 10 star rating I would. It gives a vivid and moving account in many voices of the work, sufferings and hardships the 44 people on two small boats went through in 2008 to be the first to get into the world's largest concentration camp in Gaza, and of the suffering of the people there. And it gives a detailed review with abundant evidence of the real reason for their suffering - the Israeli government's theft of the vast reserves of natural gas in Gaza waters.

You have subscribed to alerts for Bill Dienst.

You have been added to Bill Dienst's favorite list.

You can also sign-up to receive email notifications whenever Bill Dienst releases a new book.