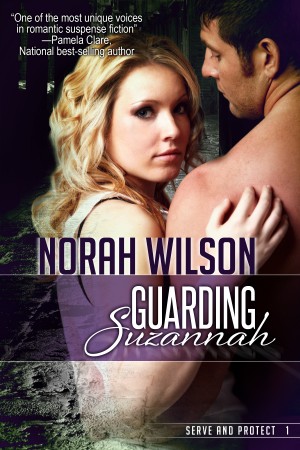 By Norah Wilson
Rated 4.54/5 based on 13 reviews
There's no love lost between criminal defense lawyer Suzannah Phelps and the Fredericdton police department. Now she's being stalked, but she won’t turn to the police, who may be behind it. But when Det. John Quigley learns of it, he's determined to protect her, no matter who is harassing her. They've struck sparks off each other in the courtroom, and he's burning to do the same in the bedroom.
Download: epub mobi (Kindle) pdf more Online Reader
lrf pdb txt
Price: Free! USD
Add to Library
Create Widget
Tags: romantic suspense love suspense adventure police danger sensual lawyer excitement cops sensuality emotional romance sexual attraction happilyeverafter
About Norah Wilson

Norah Wilson lives in Fredericton, New Brunswick, Canada with her husband and two adult children, a Rotti-Lab mix dog and numerous rats (the pet kind). She has been writing romance a long while, and has finalled multiple times in the Romance Writers of America's Golden Heart contest. She also won Dorchester Publishing's New Voice in Romance contest in 2003. Norah also writes paranormal YA stories with writing partner Heather Doherty, under the name Wilson Doherty. She and Heather also write the hilarious Dix Dodd mysteries under the name N.L. Wilson.

Also in Series: Serve and Protect

I enjoyed this read.

(reviewed 25 days after purchase)
Laura VanGuilder reviewed on May 29, 2013

Very good. I liked the suspense and storyline. Well paced.

Good read. Not sure now which of Norah's books I read first but liked her writing enough to read them all and am anxiously waiting for more!

Enjoyed the book. Well paced and plotted, which kept me wanting to keep reading, and guessing until the end. Great chemistry between the two leads. Just a couple of "flaws": one was the way John Quigley's eye colour changed about half-way through the book (a little disconcerting when trying to visualise the character!), and the other was the abrupt ending, which someone else has mentioned.

(reviewed 27 days after purchase)
Jessica reviewed on Nov. 15, 2011
(no rating)
I love everything by this writer

(reviewed 74 days after purchase)
MelisaBee reviewed on May 2, 2011

Another great read from Ms. Wilson- I nearly read this book in one sitting! A real page turner, this book has sexy, romantic intrigue and keeps the reader guessing right up to the end. I am so ready to read the next book in the series!

I am in love with Quigg. What a hero! Great chemistry, terrific pacing, and a neat twist at the end. Loved it!

Suzannah works as a criminal defense attorney and let’s just say she won’t be receiving a lot of Christmas cards from the police force. Making mince meat out of their testimony is her specialty thus leading to her nick name “She-Rex”. Now that she has a creepy stalker escalating in his attempts to get to her she must force herself to trust a cop. THE cop that draws her eye whenever he is in the room, John Quigg.

John as been borderline obsessed with Suzannah for two years. The first time encountering her in a court room has been forever branded in his mind. The opportunity has come for him to get one on one time with her as her personal body guard/faux boyfriend. However, when this case is closed John intends to be a real boyfriend and forever fixture in her life. Now he just has to convince her of that.

This was a good storyline with some quick wit humor,which I love. I would have liked a bit more where the chemistry was concerned. Also, there were two secondary characters I would have enjoyed more involvement from, Ray and Grace. These two strong, and funny characters, when making an appearance, added a great deal to the story. They made John and Suzannah feel more relatable.

As far as the climax or the who done it to the story, in my opinion was reached abruptly. I would have liked more detail about the big baddy and more information about the character.

All in all I enjoyed this novella. I believe there is potential for this series and plan to continue.

You have subscribed to alerts for Norah Wilson.

You have been added to Norah Wilson's favorite list.

You can also sign-up to receive email notifications whenever Norah Wilson releases a new book.