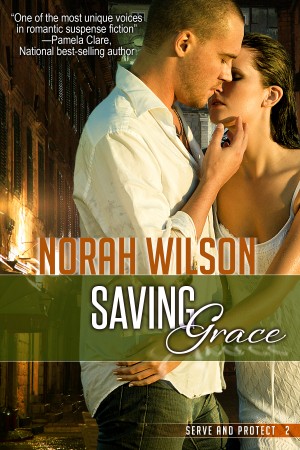 By Norah Wilson
Rated 4.77/5 based on 13 reviews
After wrecking her car and waking with amnesia, reporter Grace Morgan is shocked to hear she'd left the husband she loves (Police Detective Ray Morgan)for another man. It can't be true! Can it? She’s determined to remember, even if it kills her. And it just might. When bullets start to fly, Ray is forced to take the wife he thinks faithless on the lam while he figures out who wants her dead.

Norah Wilson lives in Fredericton, New Brunswick, Canada with her husband and two adult children, a Rotti-Lab mix dog and numerous rats (the pet kind). She has been writing romance a long while, and has finalled multiple times in the Romance Writers of America's Golden Heart contest. She also won Dorchester Publishing's New Voice in Romance contest in 2003. Norah also writes paranormal YA stories with writing partner Heather Doherty, under the name Wilson Doherty. She and Heather also write the hilarious Dix Dodd mysteries under the name N.L. Wilson.

Also in Series: Serve and Protect

i read Saving Grace all the way through which is unusual. i couldn't wait to find out how it ended.

Absolutely one of the best reads i have read in a while. Thought plot was solid and the characters...wow! Definitely recommending this book and author. Even better second time round!

Great story with a fast pace and interesting characters.

Excellent story! Two very strong and well written characters who are broken in their own ways finally learn to love one another amid a sudden danger that has cropped up in their lives. There is a bit of suspension of belief you have to do in order to get into the story, but hey, it's romantic suspense! Recommended!

Saving Grace was a surprise to me. When I have read other 'romantic thrillers' I have usually found them not so much about the thriller as the romance, with sometimes sketchy effect. This little novel was different. It did do the romance, but it was heavy on the thriller, which suits my particular tastes.

What I felt was a great deal of respect for the author. Grace and Ray have been married for nearly five years. But what they don't know about each other could fill volumes. In the end, while the thriller and romance writing was very good, what really impressed me is how well Norah explored the manner in which people can live together, love one another, and yet know next to nothing about who each person truly is. While Grace and Ray are on the run, as well described in other reviews, what I found the most interesting about her writing is how she took two people and opened them up to the reader, telling a story of how we can build a shadow life for ourselves, living within a mythical self-portrait – and how that shadow life can nearly destroy both you and the people you love. Another thing I liked very much about the story, in this same vein, is the growth of Grace as a person as she began to walk out of that shadow and find herself as a person. Very cool.

In the long run, Grace saved Ray as much as he saved her. Nice!

The amnesia portion of the book is well researched and realistic, unlike other books that plunge into the murky waters of the far-from-common total amnesia, Norah handles the situation with an extremely deft hand.

Overall, this book was a very nice way to fill a few hours. The characters are highly believable, the story line interesting and not overdone. If you like romances, light thrillers, and books that allow you to see a great deal of personal development in the characters, you can't go wrong with “Saving Grace.”

Good read. Not sure now which of Norah's books I read first but liked her writing enough to read them all and am anxiously waiting for more!

Another good book in Norah Wilson's 'Serve and Protect' series, and just as tightly plotted and suspenseful as 'Guarding Suzannah', but with the same flaw of an abrupt ending, and all-too-convenient disposal of the villain. But then I guess that, being mainly a romance, the thriller part comes secondary as a plot device for the development of that relationship, though the thriller part is done very well in the main. I did notice that Ray Morgan shared the same trait with John Quigley from the previous book, of having given up smoking eight years previously, and they also appear to have the same hair colour (I can't help but notice the minutiae!) Great read, nonetheless.

I love everything by this writer

It's been a while since I read the three books in this series, so I had to refresh myself. Now I remember. Ray Morgan...mmmmm. :) Again, super chemistry (especially considering these two are married!), perfect pacing and an exciting climax. Great character growth, too, for both of them.

Wilson keeps them coming. This is a great book!

You have subscribed to alerts for Norah Wilson.

You have been added to Norah Wilson's favorite list.

You can also sign-up to receive email notifications whenever Norah Wilson releases a new book.