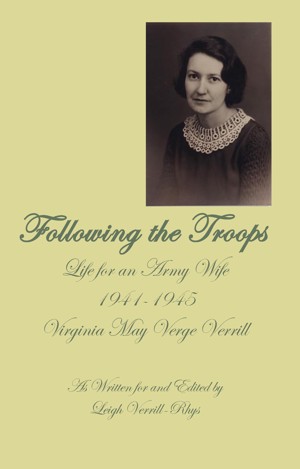 By Leigh Verrill-Rhys
My mother loved to tell stories about her life and I loved to listen. When I grew up and had an opportunity to publish her World War II adventures, I asked her to write these stories for a collection I was working on for Honno, the Welsh Women’s Press, Parachutes & Petticoats.
Available ebook formats: epub mobi pdf rtf lrf pdb txt html
First 10% Sample: mobi (Kindle) lrf pdb Online Reader
Price: $1.95 USD
Buy Add to Library Give as a Gift
How gifting works
Create Widget
Tags: world war ii women wartime children in wartime dyslexia rationing wives of soldiers u s army
About Leigh Verrill-Rhys

A native of Paris Hill, Maine, Leigh spent most of her childhood and early adult years in San Francisco before emigrating to Wales to marry and raise three sons. She has been a writer, editor and lecturer for most of her life, intermingled with career portfolios in marketing, finance and community arts projects. Leigh's debut novel, WAIT A LONELY LIFETIME, was released in April 2012, published by Avalon Books. She is a member of the Authors Guild, a former member of the Welsh Academy and the Arts Forum and admits to running with scissors and leaping before she looks.

Leigh also publishes as an entrepreneurial author with Eres (eresbooks.com). In 2012 and 2013, she released the romantic comedy novel by installment, NIGHTS BEFORE, in six episodes set in Portland Maine, beginning with TWAS THE NIGHT BEFORE NEW YEAR, followed by stories set during celebrations and commemorations during the year, ending with TWAS THE NIGHT BEFORE CHRISTMAS EVE. These six stories are available individually as ebooks. A print edition, NIGHTS BEFORE: THE NOVEL, is now available.

For Leigh's third novel, SALSA DANCING WITH PTERODACTYLS, released in March 2014, she first had to learn how to spell ‘pterodactyl’! THIS CAN'T BE LOVE, her fourth novel and the second in the ‘Americans in Love’ in foreign places, is set in Edinburgh during the Fringe Festival.

An award-winning editor, she has published three volumes of women's autobiographical writing about their lives in Wales and during World War II: ON MY LIFE; PARACHUTES & PETTICOATS; and IANCS, CONSHIS a SPAM (all published by Honno Welsh Women's Press). She has released a collection of her mother's adventures on her travels during the Second World War, FOLLOWING THE TROOPS.

Leigh’s first American history novel: PAVANE FOR MISS MARCHER, set in post-civil war Maine, inspired by her brother’s, Thomas, passion for American history, many historians, including Shelby Foote, Thomas A. Desjardin, Lochlainn Seabrook, Michael Shaara, her family’s part in the Battle for Little Round Top as well as authors Louisa May Alcott and Elswyth Thane.

More about all of Leigh’s independently published novels are available through her website, leighverrillrhys.com and eresbooks.com, Smashwords, as well as KDP: Amazon and most independent online booksellers.

Reviews of Following the Troops: Life for an Army Wife 1941-1945 by Leigh Verrill-Rhys