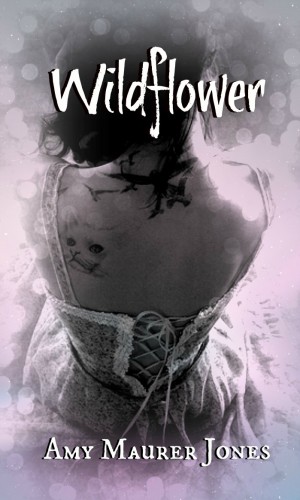 Wildflower, The Wildflower Series, Book One

By Amy Maurer Jones
Rated 4.50/5 based on 2 reviews
I am a young adult writer and my books and stories are geared toward young adults. I do not write new adult, adult or erotica. More
Laney Stillwater has obsessed over gorgeous Jordan Stone for as long as she can remember, but when Joshua Bangs moves to Plymouth, her fascination is divided.

Laney’s instant connection with the new boy lessens the appeal of perfect Jordan’s game of cat and mouse. When he finally levels with her about his true feelings, it may be too little too late.

Unfortunately, the three souls have been intertwined for hundreds of years, living the same life over and over. When destiny demands a tragic ending, how can love prevail?
Available ebook formats: epub mobi lrf
Price: $0.99 USD
Buy Add to Library Give as a Gift
How gifting works
Create Widget
Tags: paranormal romance teens historical high school indie reincaration
About Amy Maurer Jones

Amy Maurer Jones has been happily married to her own version of Edward Cullen for sixteen years. She lives in the small town of Tabor City, North Carolina (close to the North and South Carolina shore) with her husband Kelly and their two beautiful children, Olivia and Keaton.

Amy loves reading and writing Young Adult because she finds young people inspiring. She appreciates how teens are able to look at the world with a fresh perspective and willingly open their minds to the endless possibilities that life has to offer. She particularly enjoys writing strong heroines who face problems head on, learn, grow and mature into the type of people who do the right thing.

When Amy isn't reading and writing, she teaches high school theater arts and dance. To say that Amy has a flare for all things creative would be an understatement, just don't ask her to assemble anything that requires instructions or sadly, you will be out of luck!

Favorite quote:
"You are unique, and if that is not fulfilled, then something has been lost." ~ Martha Graham

Reviews of Wildflower, The Wildflower Series, Book One by Amy Maurer Jones

The first line in the synopsis is "Love can be tragic," and Amy Maurer Jones writes a beautiful story about love and reincarnation. This is the first book in the Wildflower series. The book is set in both the past and present and is mostly told through Laney Stillwater's perspective. Laney is your typical high school student with very few friends. She is an outcast because of her ethnic background (Native American) and most of her classmates don't understand her family's beliefs. I can easily relate to Laney (I've been in her situation many times) and no doubt several of you will too. Laney shares a connection with a previous life. In 17th century Plymouth, she's actually Wildflower, a Native American teenager from the Wampanoag tribe (as well as in the present). As a young woman she meets an Englishman, Joshua Bangs, a member of Plymouth Colony on the day his father helps organize a trade with the Wampanoags. Both Joshua and Wildflower are smitten with each other, but because of their backgrounds, they can't be together. Add Paco, a Wampanoag warrior, who has been promised to Wildflower you wind up with a love triangle.

In the present, Laney is a bit unsure of Jordan's (a popular, good looking student) intentions. She immediately begins to question why he would ask her out and wonders if people were taking bets and if money was exchanged for his cooperation. I too wondered with Laney because I got a shady feeling from him and it's not until Jones explains his role in Laney's life do I fully come to understand Jordan. Of course since Laney is an outcast, once it is known that she believes in reincarnation (an episode involving her having to explain to her friends how she knows the new guy, Joshua, without ever having met him before) all hell breaks loose. The popular girl, Gracie, starts to make Laney's life harder than it should be. At one point Gracie goes as far to say that Laney worships Satan. Jones does an excellent job portraying the prejudices teenagers can have regarding things they have no idea about. Your heart breaks for Laney and you're glad she has a true friend, Carly, on her side. When Jones finally introduces us to Joshua Bangs, she does it in a way where she shows us there are no awkwardness between Laney and him. Gradually she feeds us information regarding what Joshua knows and believes. The fact he accepted it as truth and when he realizes they share a bond, it is a beautifully written moment.

Jones does a good job with the historical research. During the flashbacks to 17th century Plymouth you feel as you are part of it. One of my favorite flashback scenes is Wildflower hiding so she too can learn the English language because she wants to be able to communicate with Joshua. Of course in any love triangle there will be a losing party. In this case one can't help but feel sorry for Jordan (Paco) knowing that history is working against him. You secretly cheer him on, but at the same time your heart breaks at the possibility of Joshua and Laney (or in their past: Joshua and Wildflower) not being together. Jones slowly feeds us information regarding the history of all three and their ties to 17th century Plymouth. While reading I kept wondering if this, present day, was their only reincarnated life or if there were others. If there were others, what were they and how did they story end? Alas we didn't have to wait long since Jones gives us one additional life, the 20th century during World War II. All three must work together to stop history from repeating itself, primarily how the love triangle ended, and she ends book one with an intriguing cliffhanger.

I gave it a 4 due to the change in tenses in a few places. Nothing major, but a bit noticeable. Also the changes from past to present (mostly later in the book) tended to be a bit distracting especially towards the end where she fully explains Wildflower, Joshua, and Paco's story. By no means does it affect reading, but if you're the type to be heavily drawn into a book this might distract you a bit. The language during the flashback scenes is a bit too modern, but I let it go because at one point Laney and Joshua are talking about memories and how those memories belong to the previous lives. Everything Laney, Joshua, and Paco saw were seen through modern eyes. Other than that the book is pretty much solid. I really can't wait to see how this ends.

This review was posted on my blog: Literary, etc.

When I first heard about Amy's novel Wildflower, I was very enthusiastic to see what kind of approach she would take in regard to the culture and beliefs of the Wampanoag tribe. After reading her novel, all I can say is that Wildflower is beautifully written. I love how the syntax changes between time periods, and the problems translate beyond the past. I also really appreciated that the couples fell in love without knowledge of their past lives. They aren't together just because they were in past.

Soulmates Laney and Joshua have been reincarnated and now have the chance to love one another again after their tragic parting in the past. The flashbacks/dreams of the past are full of emotion and give enough detail to explain how the characters are feeling in the present. Tossing Jordan in the mix heightens the tension. He wants to be with Laney so badly, but his efforts are thwarted at every turn. The reader can really feel the desperation each character feels to just move past the blockades and be with their one true love. But scorned lovers and bitter jealousy just can't let that happen.

Wildflower has all the drama, angst, and romantic language every YA reader craves in a sweet love story. What I liked most was the realization at the end that everything is not as it seems. Wildflower is truly a delight.

You have subscribed to Smashwords Alerts new release notifications for Amy Maurer Jones.

You have been added to Amy Maurer Jones's favorite list.

You can also sign-up to receive email notifications whenever Amy Maurer Jones releases a new book.