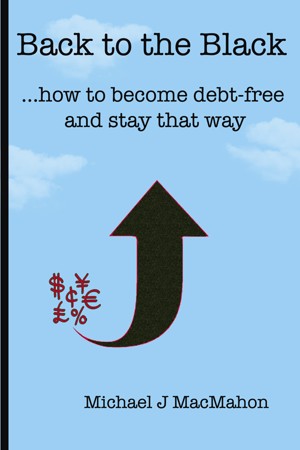 Back to the Black

By Michael MacMahon
Rated 4.50/5 based on 2 reviews
Worried about debt? This book shows how to handle stress, optimise your repayment schedule; budget and track spending.

You’ll feel confident of your ability to handle the debt and will have a plan for doing so. You’ll learn to evaluate today’s situation and decide realistic goals; to develop options and calculate discretionary income. Armed with that information, decisions will seem easier

Michael MacMahon wrote his first book, "Back to the Black: how to become debt-free and stay that way", as a result of the lessons he learned the hard way, during a brush with bankruptcy in the late 1990s.

Before that happened, he’d spent most of his formative years working in the chemical industry, including British Oxygen and Unilever, ending up as Managing Director of the UK subsidiary of a Swedish group. He then had an 8- year spell running his own training consultancy firm. Later he worked as a fundraiser and media spokesman in the charity sector.

The root cause of Michael’s debt problem was the fact that the costs of running his business gradually started to exceed the business’s income; a gap that he ignored at first and then, increasingly, began to fund on credit. By the time he realised that the problem would not go away, and the credit started to run out, the hole he had dug for himself was deep. At the lowest point he was close to bankruptcy. However, he managed to find alternative solutions and eventually got himself “back to the black”. The story of those experiences, and what he learned as a result, forms the core of this book. The information contained in it will be of value to anyone with debt problems, whether business debts or personal debts or both.

Before writing ‘Back to the Black’, Michael MacMahon wrote many technical and trade journal articles and handbooks as part of his work in the chemical industry; his publications included a technical handbook that was published in a dozen languages and is still available 20 years later.
Michael lives in Bristol, UK. He works these days as a writer, presenter and public speaker and is also an actor and voiceover. He has two daughters, of whom he is ridiculously proud.

Michael has written a comprehensive guide on how to get out of debt, based on his personal experience. He describes the various routes one could take, how they might work, what the consequences might be, and which points to take into consideration before deciding on which might be the right one.

He goes on to offer some handy hints and gems of wisdom on the practical actions the reader could take to achieve his/her goal to be debt-free.

Michael also offers some good background research into the debt problem in general.

This is a well-researched and practical guide to help you solve any debt problems that you may have. Although the book has been written in the UK, the pricipals apply to where ever you are in the world and the author does include some indication of the sums in dollars or euros.

The author is able to write at first hand experience about this problem as he was himself in debt some years ago, so he fully understands the stress and difficulties involved. In fact, some of the first advice in the book deals with how to deal with that stress before you start to tackle the issues of what to do about the debts. He offers a number of options to help you decide what course to take - eg. to go bankrupt or not to go bankrupt, or how to negotiate a deal for yourself. He includes a number of case studies to help illustrate the situations and sums up each chapter with a brief resume of the points covered. At the end of the book he has provided a list of useful resources that people may wish to call on for help - government bodies, websites, organisations and charities.

You have subscribed to alerts for Michael MacMahon.

You have been added to Michael MacMahon's favorite list.

You can also sign-up to receive email notifications whenever Michael MacMahon releases a new book.