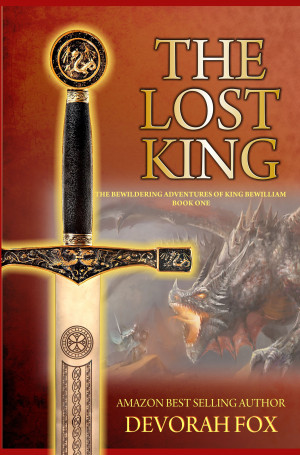 The Lost King
"The Lost King" is very entertaining, most enjoyable to read. From a medieval setting, this writer has drenched our imagination with a story of adventure, fantasy, romance, intrigue, discovery, and a spirit of examination that is reminiscent of the innate quality of mankind that results in new discoveries and inventions that, ultimately, make life on this terrestrial ball more exhilarating.

About the Series: The Bewildering Adventures of King Bewilliam

A dragon to battle? No problem for this renowned slayer. Dominions to rule? No problem for this respected king of the Chalklands and the Palisades. But life? Now there’s a never-ending challenge. Award-winning, "The Bewildering Adventures of King Bewilliam" stories are engaging, involving. Written by a writer who is mastering this form of meaningful fantasy, they tell fantastic, mystical tales with a modern slant.

Also in Series: The Bewildering Adventures of King Bewilliam

Reviews of The Lost King by Devorah Fox