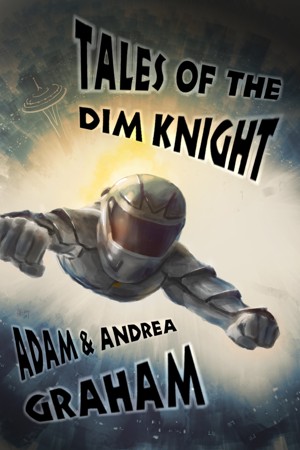 Tales of the Dim Knight

By Adam Graham
Rated 4.50/5 based on 2 reviews
Mild-mannered janitor and superhero fanboy Dave Johnson gets all his wishes at once when an alien symbiot gives him supernatural powers. But what's he to do with them? Follow his laugh-a-minute progress as he fights crime and corruption while trying to keep his family together and avoid being sued for copyright infringement.

“A light-hearted escape with a thoughtful twist." Jill Williamson More
What would you do if you had superpowers?

Dave Johnson is the world’s biggest superhero fan. His comics allow him to escape the pain of the real world where he's stuck in a dead end job and his wife and eldest son have lost respect for him.


To protect his family, Dave guards his secret identity from everyone, including his wife, Naomi. She begins to suspect Dave’s rapidly improving body and unexplained absences are signs of an affair. With Dave’s head in the clouds, can the Johnson marriage survive?

Also in Series: Adventures of Powerhouse

Reviews of Tales of the Dim Knight by Adam Graham

Being a superhero is tough. Saving the world while raising a family is tougher. That’s what Dave Johnson finds out when he encounters an alien symbiote in an FBI warehouse. Now he has to balance his real job as a janitor, his new life as a superhero, his kids, and his wife while battling gang lords, supervillains, mad scientists, terrorists, and – worst of all – a divorce lawyer.

Tales of a Dim Knight is a witty adventure with plenty of amusing references to comic books. Interspersed with the laughs is a story about finding out what really matters in life.

I enjoyed the story from cover to cover. The characters had believable personalities, and even the Bad Guy had a character arc. Although Powerhouse had a heavy list of superpowers, he couldn’t just walk over the enemies he faced. The plot moved along at a good speed.

Dave faces his greatest dreams and his worst nightmares and comes out a better man in the end.

Well written and copyedited. It's nice to read through a story without a bunch of glaring typos. I didn't really get a lot up front to care about with Dave. But later he kind of grew on me. Nothing to dislike about him, after all.
Like the portrayal of nerd culture and the message board, and the fact that it's the 'real' news.
The confrontation with the wife up front... I don't know, seemed a bit formulaic.
Still, well written. Wouldn't mind seeing where the story goes.