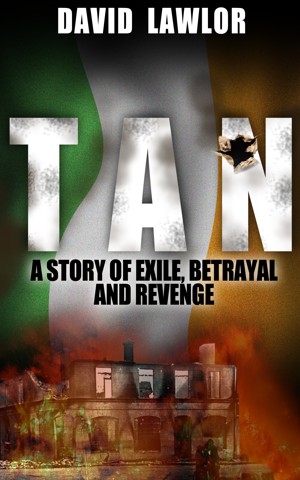 Tan - A Story of Exile, Betrayal and Revenge

By David Lawlor
It’s 1914 and Liam Mannion is forced to flee Ireland over a crime he didn’t commit. He enlists and endures the hell of trench warfare. Five years later he returns to his home town as a Black and Tan - specialist troops who become notorious for their brutality. Liam is torn between loyalty to the Army and to his childhood friends, who are now fighting alongside the rebels to overthrow British rule. More
‘Peelers have a knack for hitting you where it hurts; broken nose, bruised ribs, a few loosened teeth...no more than a rapist deserved, Sergeant Coveney and District Inspector Webber had said. Proper order, too - except the lad was no rapist, and Webber knew it.’

It’s 1914 and Liam Mannion is forced into exile for a crime he didn’t commit. He flees Balbriggan, the only home he has ever known and travels to England, where he enlists and endures the torment of trench warfare in France. Five years later he’s back in England, a changed man, living in the shadow of his battlefield memories. Liam finds work in a Manchester cotton mill but prejudice and illness soon see him destitute. Starving and desperate, he enlists in a new military force heading to Ireland - the Black and Tans - and is posted to the very town he fled as a youth.

While he has been away Liam’s childhood friends have joined the republican cause, while his brother has allied himself to the Crown forces. Liam must wrestle with his own conflicted feelings about duty to the ruthless Tans and loyalty to his friends. The potent combination of ambition, patriotism and betrayal collide, forcing him to act as he comes face to face with the man who spread lies about him all those years before.
Available ebook formats: epub mobi pdf rtf lrf pdb txt html
First 15% Sample: epub mobi (Kindle) lrf more Online Reader
pdb
Price: $3.98 USD
Buy Add to Library Give as a Gift
How gifting works
Create Widget
Tags: war of independence ireland history black and tans
About David Lawlor

David Lawlor is a journalist and editor who has been writing features, reviews and working as a production journalist in national newspapers for over 25 years.

David lives in Greystones, Ireland, with his wife and four children.

Reviews of Tan - A Story of Exile, Betrayal and Revenge by David Lawlor

You have subscribed to alerts for David Lawlor.

You have been added to David Lawlor's favorite list.

You can also sign-up to receive email notifications whenever David Lawlor releases a new book.