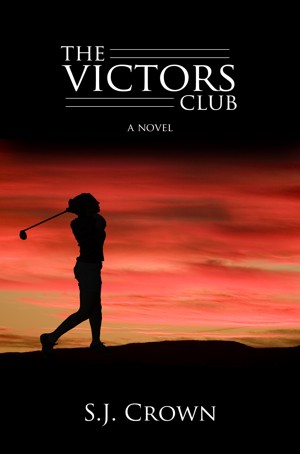 By S. J. Crown
A lady golfer dreams of winning a men's tournament so she can compete in golf's premier event, The Victors. For her, nothing less will prove she's not the loser her mother once called her. Determined, yet doubting her own remarkable golf talent, she marries and caddies for a tour pro. But when a family crisis sidelines her from the tour, events push her to take on the guys herself. More
Star Mavin, a woman with remarkable golf talent, dreams of winning a men’s tournament so she can play in golf’s premier event, The Victors. For her, nothing less will prove to her father, who left the pro tour, and her mother, who ran off with a Victors champion, that she’s not the loser her mother once called her. Skeptical of her own chances to beat the guys, Star marries and caddies for an up-and-coming pro. But despite her considerable help, he doesn’t win, and then a family crisis rips her away from her husband and pushes Star to test her own skill in the world of men’s tournament golf.
Now Star must outplay the men while enduring the sexist abuse that still spews from golf’s elitists, those committed to defending their male-dominated kingdom. Star finds a faithful caddie, a scarred gentleman who is a victim of the elitists himself, and he joins Star in her quest. As the gender-based conflict heats up and gains national attention, Star learns who the real victors are, and she finds that sometimes you have to give up something so you can play a more rewarding game.
This novel is for anyone who loves golf, especially the millions of lady golfers around the world. And with a hefty dose of romance and family discord thrown in, non-golfers can enjoy The Victors Club too!
Available ebook formats: epub mobi pdf rtf lrf pdb txt html
First 15% Sample: epub mobi (Kindle) lrf more Online Reader
pdb
Price: $2.99 USD
Buy Add to Library Give as a Gift
How gifting works
Create Widget
Tags: golf for women sports novel sports fiction golf tournament golfers and nongolfers will enjoy this book golf novel golf fiction
About S. J. Crown

Early on S. J. learned that in the world of fiction an underdog can win. One of his first favorite reads was a novel called THE KID WHO BATTED 1.000, a tale about a last-to-first-place baseball team. Plenty corny, but he still thinks it’s better than the movie ANGELS IN THE OUTFIELD. The clincher for his writing career might have been when he discovered alliteration, though he couldn’t have defined or even pronounced the word. In first grade he wrote a little tale entitled, ahem, “On Porpoise on Purpose.” He doesn't remember the details, except that his young male hero, riding the back of a big fish, performed some bold deed of great import. And no, Flipper wasn’t on TV yet. From there, he gathered enough literary acumen that his eighth grade teacher told him he had an ear for dialogue, and then somehow he won the county spelling bee, and then what seems like a few days ago he grew up, though his dear wife, son, and daughter might question that last assertion.
Some honest-to-goodness authors told him he could write a bit, so he submitted a few short pieces of fiction, some of which were published. Then he picked his own underdog and wrote a novel about an amateur woman golfing against the guys, and he called it THE VICTORS CLUB. He very much wants folks to read it.
Anyone can find out what S. J. is up to by checking out his website at sjcrown.com, where he blends fiction and sports together.

Reviews of The Victors Club by S. J. Crown

You have subscribed to Smashwords Alerts new release notifications for S. J. Crown.

You have been added to S. J. Crown's favorite list.

You can also sign-up to receive email notifications whenever S. J. Crown releases a new book.