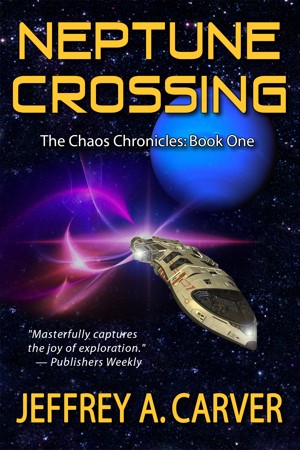 By Jeffrey A. Carver
Rated 5.00/5 based on 3 reviews
When John Bandicut encounters an alien intelligence on Neptune's moon Triton, his life changes irrevocably. Urged by the alien quarx now sharing his mind, he accepts an audacious mission—to steal a ship and hurtle across the solar system in a desperate bid for Earth's survival. Book 1 of The Chaos Chronicles, by the Nebula-nominated author of Eternity's End—with a new Afterword by the author. More
When John Bandicut sets out across the surface of Triton, he’s hardly ready for the storm of chaos that’s about to blow through his life. The alien quarx that soon inhabits his mind is humanity’s first contact with an alien life—a contact Bandicut can reveal to no one. The quarx, part of an ancient galactic civilization that manipulates chaos theory to predict catastrophic events, seeks to prevent a cometary collision that could destroy the Earth. But it must have help. If Bandicut chooses to trust the quarx, he must break all the rules—indeed, sacrifice his life as he knows it—to prevent humanity’s greatest cataclysm. Leaving friends and lover behind, hurtling across the solar system in a stolen spaceship, Bandicut can only pray that his actions will save the Earth. Even if he doesn’t live to see it again. From the Nebula-nominated author of Eternity’s End. DRM-free ebook edition.

“Jeff Carver is a hard sf writer who gets it right—his science and his people are equally convincing. Neptune Crossing combines his strengths, from a chilling look at alien machine intelligence, to cutting-edge chaos theory, to the pangs of finite humans in the face of the infinite. If you like intriguing ideas delivered in an exciting plot, this is your meat.” —Gregory Benford

“Reveals an alien encounter brushing hard against a soul, and takes us from there to the far reaches of the cosmos, all with the sure touch of a writer who knows his science. Jeff Carver has done it again!” —David Brin

“A complex and believable protagonist—an ordinary man rising to extraordinary circumstances—and an alien presence that is at once convincingly strange and deeply real. I’m really glad to have read this one.” —Melissa Scott, author of Dreamships and Trouble and Her Friends

“One of the very best things Carver has written, a traditional adventure filled with mystery and wonder and featuring a likable and believable protagonist thrust onto a stage for which he is ill prepared.” — Science Fiction Chronicle

“A roaring, cross-the-solar-system adventure of the first water. The kind of stuff that made us all love science fiction.” —Jack McDevitt, author of Seeker and Chindi

Reviews of Neptune Crossing by Jeffrey A. Carver

Great adventure, hard scifi with heart, about alien friendship (and love) and lots of phantastic ideas, always believable. I could hardly put my reader aside!

I loved Carver's realism describing the Neptune moon Triton so accurate even before New Horizons visited the similar world Pluto.
The book in some ways reminds me of Asimov or Arthur C Clarke.
The main character John Bandicut is a loner a very compelling.

This future drama is firmly set in the time it was written, after Voyager 2 took the first photos of Neptune. And when chaos theory, popularised by James Gleick, was a talking point. It is to the 1990s, what the Manhattan project legacy of atomic piles, was to the 1950s, propagandised, as was this outrageous menace to future generations, into a panacea that lingers on to this unfortunate day. I don’t remember Carver being guilty of this dangerous delusion, that still besets many a science-fiction.
Carver has republished his books from the traditional paperback publishing houses, into e-book form. He is a professional, who, I gather, conducts classes, which serve to emphasise that status. And it shows in his writing, that keeps in touch with the moment, so that the reader lives events as they happen.
This is dramatic, at the climax, with all the awkwardness involved in trying to steal a spaceship.
However, the rest of the long narrative may be too introverted to convert readily to the cinema. Dramatic or not, the tale offers a steady, and rather masterly, supply of objectionable characters. The author also does a fair job of the more agreeable souls. And even in so exotic a spot as Charon, the moon of Pluto, the drudgery of the working man makes itself felt.
The narrative character finds himself host to an alien mentality, which is like characterising a split personality. He cannot tell the doctor of his condition without being diagnosed as psychotic. The personal conversation of John Bandicut must serve as a self therapy.
The plot does make the intelligent supposition that First Contact may be with a much older and more benevolent life form.
The outcome owes something to that of 2001 by Arthur C Clarke. It is not really credible but rather something contrived, to set off the sequel from a radically different setting, while implausibly preserving the previously created character.

I am always on the look out for hard SF. When I do find it, usually the characters are lacking. Just bots to show off the shiny tech.

Not here. Carver has written plausible SF that has both science and heart.