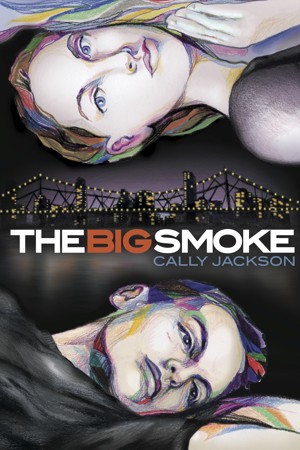 When the semester starts, things get complicated. Ceara’s best friend withdraws from her, Seb’s closest mate turns into a sleazebag, and the relentless demands of university make their stress levels soar. Before their first semester is over, both Seb and Ceara will be forced to question who they are and what they want from their lives. Will they have the courage to find the answers, or will they crumble under the pressure? And when they finally meet, will it be love at first sight or a collision of headstrong personalities?
Available ebook formats: epub mobi pdf rtf lrf pdb txt html
First 25% Sample: epub mobi (Kindle) lrf more Online Reader
pdb
Price: $2.99 USD
Buy Add to Library Give as a Gift
How gifting works
Create Widget
Tags: coming of age drama mental illness family university young adult australia brisbane family relationships new adult moving from home
About Cally Jackson

Cally Jackson grew up in the small country town of Gatton. Her passion for fictional writing first emerged in grade two when she got in trouble for penning her own tale instead of copying directly from a story book as she was supposed to be doing – it was a handwriting exercise, after all.

Cally now lives in Brisbane with the two loves of her life – her husband, Mark, and their dog, Lucy. The Big Smoke is her first novel.

Reviews of The Big Smoke by Cally Jackson

I'm going to be honest here and say that originally I wasn't sure if I wanted to read this. I wasn't sure it was going to be "my thing" by the blurb. For that reason, it means a lot more when I say I REALLY enjoyed this. Once you read you'll realize how brilliant the cover is and why the characters are sketched in.

This is a story about two people who want something very much, but it's the wrong thing. How many times have we been in the same place in our lives? The Big Smoke is a coming of age story about all the crap these two people have to go through in order to learn what's really important. And only then do they find what they wanted.

This story made me cry! I mean really hurt for these characters. A best friend, a dog, the "could have beens", and the letting go of guilt really hit home. Cally did a wonderful job digging into some deep emotional topics in a realistic and believable way.

THE GOOD: Relationships, romance, drama, humour, heartbreak, coming of age--this book has a lot packed into it! It's a long book. Not long in a this-story-is-dragging-on-forever-I-wish-it-would-end kinda way. No, no, no. Long in a I-scored-two-awesome-books-in-one kinda way!! The chapters alternate between Seb and Ceara, two very different characters with distinctive voices. They're heading off to university with all their hopes, dreams, fears and expectations--which is already a lot to deal with before you add in the ordeals life is about to throw at them: eating disorders, horrible house mates, broken friendships, and more.

Ceara is the reserved, bookish type, so I identified pretty well with her ;-) And Seb ... well, he's a guy! I've obviously never been inside the head of a boy (duh!), but it seemed like the author did a great job of getting inside Seb's head. I LOVE reading a story from two points of view, and it was fascinating to see all the threads of these two separate lives interweaving, criss-crossing, just missing, and then finally coming together (how and when? I'm not going to tell you that. You have to read it for yourself!).

THE BAD: There really isn't anything to say here. I read an early ARC, so I can't comment on the absence or presence of typos or grammatical errors in the final version. (But I can tell you that the author is something of a perfectionist!)

THE PRETTY: I just love this cover. It's different from a lot of other covers out there. It's more arty, which is cool. And I LOVE the lights and the hazy reflection in the water!

So, if you're a fan of contemporary upper YA or NA, you should definitely check this one out when it's released later this month :-)

I received an Advanced Reader Edition of Cally Jackson's debut novel, and I read it in just a few days. It was THAT good. As a warning I want to say that my review may contain some spoilers, because I can't think of a way of talking about this tale without discussing what goes on in Ceara and Seb's lives.

"The Big Smoke" has two narrators. We've seen this plenty of times before most notably used by William Faulkner in "Absalom, Absalom." However, it is also used to great effect by George R.R. Martin in a "Song of Ice and Fire" and by countless other writers who use it to find a means of perspective in a story that is too big to encompass just one point-of-view. Cally's take on this is to use first-person, and it works wonderfully as a vehicle to tell her story. So expect to be inserted into the heads of Ceara and Seb alternately throughout the book. Cally does tell you which head you are in because the chapters are labeled with their names, and they both possess a very distinctive voice.

Cally Jackson is a great writer. The first character I want to talk about is Ceara. Her narrative can be summarized by something her friend Kristi says to her. "You're so desperate to be in a relationship, you fall in love with anyone who gives you the slightest bit of attention. You seem to think your life will only be complete when you have a boyfriend."

And it was at that moment in the book that I finally understood that behind the angst of being a new adult is often the search for validation, because we (guys and gals) go into college without a sense of identity. And maybe that's what college is supposed to do: give us time to find ourselves. I can comfortably say that Ceara definitely understands who she is by the end of the book, and it is through this vehicle that she attains happiness.

The second narrator, Seb (short for Sebastian) is told in an authentic male voice that oftentimes left me in awe that Cally could capture so perfectly how boys feel in the first year of college. Do we think about sex all the time? Absolutely. I often lament when looking back on my college years about how difficult the curriculum was because I had too many distractions caused by raging hormones. Sebastian really connects with this feeling. As well, she gives us a very human side to Seb by showing us the many rights of passage that men must attain to reach adulthood, the compromises of living with a roommate, and ultimately how every story has multiple points of view.

And it is in this that Cally is amazing. Seb's parents are divorced and there are two sides to that story. But the deconstruction doesn't stop there. "The Big Smoke" also has two sides (the tale of Ceara and Seb). Cally brings these two ships together by the end after they have each worked through their myriad issues and are now ultimately ready for a true relationship that will stand the test of time. And I just want to say, I love the way these two narratives interweave with each other through events like Seb saving Ceara's life, to mutual acquaintances and friends, to the university they both attend, and to the city they both call home. We know from the beginning (of course) that boy and girl will eventually come together. But the fun is finding out exactly how that's going to be done. And I liked that it happened naturally through time as they both became adults and knew exactly what they needed to make them complete.

This book is difficult for me to classify in terms of genre. I think it fits soundly into "New Adult," but I have no idea if that is an actual genre yet (even though more and more people are talking about it).

I think "The Big Smoke" would appeal to those who like "Literary Fiction." If you have read Michael Chabon (author of "The Wonder Boys") you would like this book, or perhaps readers of "The Ice Storm" might find similarities that they would enjoy. "The Big Smoke" is a complex look into the lives of college freshman that tackles issues of body image disorder, anorexia, abandonment, sex, relationships, and loss. This is a great book, and you would do good to read it for yourself.

You have subscribed to alerts for Cally Jackson.

You have been added to Cally Jackson's favorite list.

You can also sign-up to receive email notifications whenever Cally Jackson releases a new book.