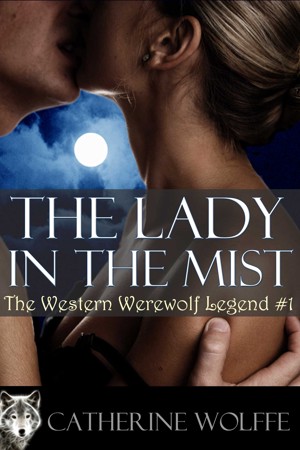 The Lady in the Mist (The Western Werewolf Legend #1)

In Book 1 of this new series by Award-winning author Catherine Wolffe, the Western Werewolf Legend weaves a new blend of western romance with paranormal elements involving werewolves and vampires.

Author and Louisiana resident Catherine Wolffe is a romance reader now addicted to the dark, steamy call of the paranormal. She is the author of bestselling vampire/werewolf romance series The Western Werewolf Legend and the novel Desire's Embrace as well as the brand new series - Shadow Company.

Catherine has been writing all her life but only recently discovered her love for paranormal romance after being introduced to the Underworld movies by her husband. After that, she decided to delve deeper and create tales hot enough with twists and action aplenty to satisfy her emerging dark hunger.

Visit www.catherinewolffe.com/ to get free steamy sneak peeks at upcoming books and more!

I loved this book! It's a great story of Sonja and Ty and how they overcame the challenge of falling in love and learning they are werewolves. Sonja discovers she is the gifted one and will lead her pack and any followers to safety against the vampires. She finds Ty on the battlefield after a horrendous battle. She gives him what he thinks I sox blood but is her own not knowing it will change him.

This is one of those books that sounded good, leading me to believe that I will like it. And I wanted to. But close to halfway through the book, the feeling of disappointment was beginning to emerge. I continued on hoping that it will get better. Sadly, by the time I finished the book, I felt let down. The whole concept and story was intriguing and had potential. But I just found myself not getting into the story and felt the story was missing some elements which would have helped me enjoy the book much more than I did.

I found myself being confused and not being completely informed of the context of the story. The book just started off with the attack on Sonja and her meeting with Hortence. It took me by surprise since the action happened so early without any background on Sonja's story (which eventually explained later on in the chapter) or the world that the story is taking place in. Already I felt as if I was dropped down in the middle of the action with no clue what happened before. I felt an underlying feeling of needing to catch up when there's really no story to catch up on.

Furthermore, I was constantly looking for an explanation on what kind of supernatural beings existed and how they fit into the context of Sonja's and Ty's world. I know that werewolves existed, but it wasn't until later on in the book that vampires were mentioned as well. A being known as the Guardian was also a part of the narrative, but like other aspects of the story, I didn't get a clear picture of who/what the Guardian is. I was also confused about Hortence. She's referred to as a witch, but there were moments where I'm not sure if she's a witch in the sense that she's a magical being or if she's considered to be a medicine woman. Overall, I'm left with a big hole of missing information that would have clarified many things which would've helped me understand the story (and in turn possible enjoy the story more).

I also would have liked to seen the romance between Sonja and Ty develop more fully. I just felt their proclamation of love occurred too soon. I understand the feelings of mutual attraction between them and acting on them. But I just thought they haven't spent enough time together to really say they're in love with each other.

I really wanted to like this book. The storyline was interesting when I read the summary, hence why I decided to read it. But when I remember this book, all I can remember is how confused I felt while reading and wanting more information about the extent of the supernatural world and its inhabitants. The story itself was well written, doing a good job of giving a narrative tone that belonged during the Civil War era. But it wasn't enough for me to overcome the holes in the details and lack of depth in the romance of the main couple.

You have subscribed to alerts for Catherine Wolffe.

You have been added to Catherine Wolffe's favorite list.

You can also sign-up to receive email notifications whenever Catherine Wolffe releases a new book.