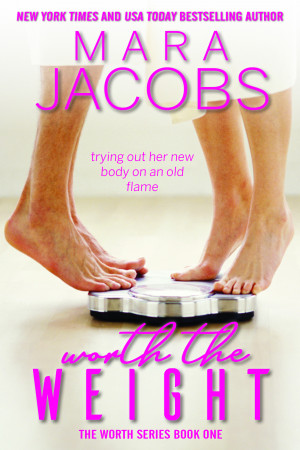 Worth The Weight (Worth Series Book 1)

By Mara Jacobs
Rated 4.20/5 based on 5 reviews
Book 1 in the New York Times bestselling Worth Series

A New Body...
A New Life...
An Old Flame? More
Book 1 in the New York Times bestselling Worth Series

Lizzie Hampton is literally a shadow of her former self. Having lost half her body weight, she's headed to her small hometown to test out her new body on an old flame.
Just a harmless fling to get her self confidence back before she returns to
the city and the new man in her life.

But Lizzie's plan has a few bumps in the road.

Finn Robbins can't believe Liz is back in town. Desperate to be the holder of her innocence eighteen years ago, he never got the chance.
Now she's back and he can finally check her off his to do list.

But her friends, his son, and the mysterious Annie may have something to say about that.

This book contains 2-3 fairly graphic love scenes and the F-bomb is detonated somewhat frequently. If it was a movie, it would be rated a hard R.

The Worth Series thus far:
1. Worth the Weight (Lizzie and Finn)
2. Worth the Drive (Katie and Dario
3. Worth the Fall (Alison and Petey)
4. Worth the Effort (Deni and Sawyer)
4.5 Totally Worth Christmas - novella (Phoebe and Charlie)
5. Worth The Price (Liv and Twain)
6. Worth The Lies (Kelsey and Huck)
7. Worth The Flight (Jess and Zeke)
8. Worth The Burn (Sarah and Reilly)
Download: epub
Price: Free! USD
Add to Library
Create Widget
Tags: contemporary romance diets small town romance plus size heroine body issues first loves
About Mara Jacobs

After graduating from Michigan State University with a degree in advertising, Mara spent several years working at daily newspapers in Advertising sales and production. This certainly prepared her for the world of deadlines!

Forever a Yooper (someone who hails from Michigan's glorious Upper Peninsula), Mara now resides in the East Lansing, Michigan, area where she is better able to root on her beloved Spartans.

About the Series: The Worth Series

Each book is a new couple with secondary characters intertwined in each story.

Also in Series: The Worth Series

Okayish didn't like that Liz was so hellbent on revenge

Liz has her own successful PR firm in Detroit where most of her clients are well known athletes. She had gained a lot of weight after school and worked hard to lose it in the last three years. One of the things she wanted to do now was to Find, F*^% and Forget Finn Robbins who she was in-love with when she was a teenager, but he broke up with her, leaving her heart broken. She goes back to that small town to stay with her parents for two months so she can carry out "The Plan" with Finn. Liz wants to complete "The Plan" for two reasons. To get Finn out of her system and to try out her new body before finding the real relationship. Finn's life has not been easy in the 15 years since he has seen Liz. His alcoholic wife left him and his two children and his 10 year old daughter is in a wheelchair with a spinal problem. Surgery may help her problem so Finn has constantly struggled to save money for the surgery. Also, he had to give up his career dreams for his family.

What Finn thought was an accidental meeting with Liz was actually set up as part of "The Plan" but when they get together things don't go the way Liz expected. She didn't expect to fall in love with Finn again.

I liked the character development and thought it was very well done. While I didn't like Liz's "Plan", I did like her and how she was so kind to everyone - except for what she planned on doing to Finn. Finn was a really nice guy and tried to provide for his family. He always felt like he came from the wrong side of town and was never good enough for Liz so getting rid of the chip on his shoulder was not easy. He had a lot of problems in his life but dealt with them. Finn's son, daughter and grandmother were great additions in this story. They helped show the strength of Finn's character.

I really liked this book and thought the ending was terrific. I highly recommend it.

Very good story about a very hard truth women fact our self-image vs. body-image. Finn and Lizzie were great together.

awesome book!! totally loved it!! gettin ready to start on the 2nd :)

You have subscribed to alerts for Mara Jacobs.

You have been added to Mara Jacobs's favorite list.

You can also sign-up to receive email notifications whenever Mara Jacobs releases a new book.