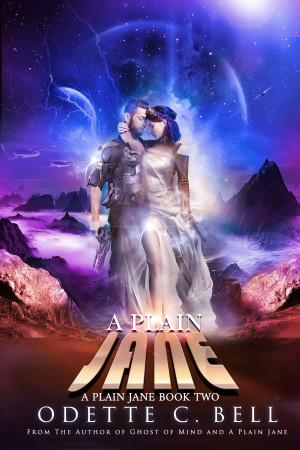 About the Series: A Plain Jane

Also in Series: A Plain Jane

Story is fast paced and exciting – more so than the first book.
Jane finally accepts that she is not plain at all aside from the embarrassing blue spots that are a dead giveaway of her emotional state (eek!) and the shimmering blue streaks in her hair! She becomes more decisive and essentially her own person, now that the nasty “assister” has been removed from her brain – pity she lost the speed, agility and kick a** abilities though! Jane is revealed to be the last of the Paran monarchy (from admin assistant to space princess in less than a month!) and has 9 super powerful robots (and one assassin robot) at her beck and call.
Lucas and Jane’s relationship is finally progressing as they rid themselves of doubts and uncertainties. Lucas seems less arrogant and less of the perfect soldier than he was in the first book and becomes more emotional and likeable.
Book ends on an utter cliffhanger scene and I’ve already bought book 3 to see what happens next. I think the greatest praise that I can give any book is that I think these books would be a great series of movies. The Galactic Senate scene description reminded me of the Galactic Senate in Star Wars (perhaps that’s where author got the idea?).
Grammatical errors are distracting, book needs editing.
*Review also published on amazon.co.uk.

Finally got round to reading this and it was every bit as good as the first. As it was a while since I read the first, I had sort of forgotten the details but the author did a good job of bring me back up to speed without being obvious about it.

The second book ends on a cliff hanger, so I have already bought book 3.

I enjoy the second book of the series, good story, Have also got book 3 in the series looking forward to reading it.

You have subscribed to Smashwords Alerts new release notifications for Odette C. Bell.