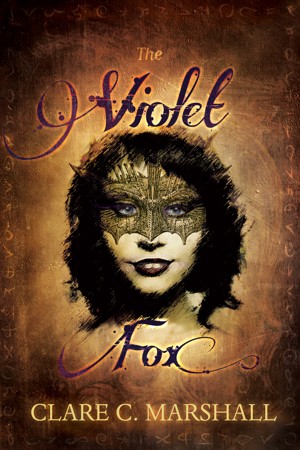 By Clare C. Marshall
Run.
That’s what instinct told me.
But to save the secrets of my people
and to protect my brother
I have to become the enemy. More
There are two kinds of people in the land of Marlenia.

The Marlenians, who live on the surface...

...and the Freetors, who are forced to live underground.

The war between them ended two hundred years ago, but the Freetors still fight for the right to live under the sun. Fifteen-year-old Kiera Driscoll embodies the Freetors’ hopes as the Violet Fox. In a violet cape and mask, she sneaks around Marlenia City stealing food and freeing her people from slavery.

Then the Elders task her with a secret mission: retrieve a stolen tome that contains the secrets of Freetor magic, something the Marlenians both fear and covet. Kiera must disguise herself as a noblewoman and infiltrate the Marlenian castle before the Freetor-hating Advisor finds out her real identity, before her brother is imprisoned because of the secrets he hides, and before she falls any more in love with the prince she’s supposed to hate.

Clare C. Marshall grew up in rural Nova Scotia with very little television and dial-up internet, and yet she turned out okay. She is the founder and author-publisher behind Faery Ink Press, where she publishes young adult science fiction, fantasy, and horror novels. Her YA sci-fi novel Dreams In Her Head was nominated for the 2014 Creation of Stories award. Her fantasy novel, The Violet Fox was given an honorable mention in the 2016 Whistler Independent Book Awards, and its sequel, The Emerald Cloth, was nominated for the 2019 Aurora Awards. When she’s not writing or fiddling up a storm, she enjoys computer games and making silly noises at her two cats, Pinecone and Pavlova.

Also in Series: The Violet Fox

You have subscribed to alerts for Clare C. Marshall.

You have been added to Clare C. Marshall's favorite list.

You can also sign-up to receive email notifications whenever Clare C. Marshall releases a new book.