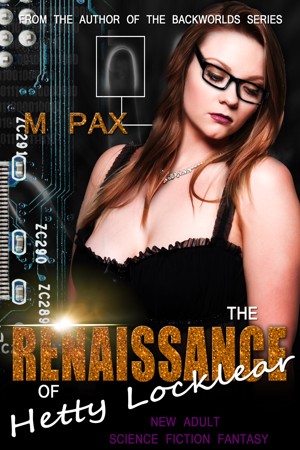 The Renaissance of Hetty Locklear

Rated 3.00/5 based on 1 review
Graduating from community college, Hetty Locklear hopes for a new life. Her diploma doesn’t change anything. Her parents didn’t bother to come home but manage to send her an invitation to join them on the Renaissance Faire circuit for the summer. She says no, until a ghost starts stalking her and a séance claims she’s in danger. More
The journey into adulthood is stranger than she expects.

Graduating from community college, Hetty Locklear hopes for a new life. Her diploma doesn’t change anything. She delves deeper into her nerd-girl fantasy where she’s the savior of a dying ancient galactic race. When she’s not role playing in the game world she created, she’s still stuck working at the convenience store and doused in coffee stains. Her parents didn’t bother to come home but manage to send her an invitation to join them on the Renaissance Faire circuit for the summer. Her first reaction is to say no, until a ghost starts stalking her and a séance claims she’s in danger.
Available ebook formats: epub mobi pdf lrf pdb txt html
First 30% Sample: mobi (Kindle) lrf pdb Online Reader
Price: $2.99 USD
Buy Add to Library Give as a Gift
How gifting works
Create Widget
Tags: chick lit contemporary fantasy oregon chic lit new adult contemporary science fiction genetic experimentation oregon author
About M. Pax

Reviews of The Renaissance of Hetty Locklear by M. Pax

There were many aspects of this that I liked a lot, in particular the geek girl main character and her roommates, who spend all of their free time eating pastries and playing an online RPG that they've created themselves. The three of them have a solid, realistic friendship and its always nice to see such a thing portrayed (especially when it passes the Bechdel Test)!

It was intriguingly hypocritical, though not really commented upon, that Hetty -- so into online RPGs -- would be so down on the Renaissance Fair lifestyle that her own parents live, since these are both "geeky" things, although Hetty is bitter of their abandonment of her and not because of the Ren Fair lifestyle itself. I thought from the book description that Ren Fairs would play a bigger part, but Hetty only attends for one day. But I did like, ultimately, how the 'high-fantasy' elements of the book function as a misdirection away from the modern sci-fi elements that eventually take precedence.

I thought it neat, at first, that Hetty was portrayed as so clueless about adulthood and what she wants to do with her life. We need more books urban fantasy books wherein the heroine works a crap job at a convenience store -- they can't all be detectives and heiresses! However Hetty's basic immaturity wore out its welcome for me. Although there are hints of character growth, Hetty mostly just continues along waiting for things to magically happen to her (regardless of whether or not they do) and pretty much all of this revolves around her need for male approval. From the beginning I thought the book was going to lead away from that, with Hetty learning that she doesn't need a man for validation, and I felt a little cheated when things did not go that way. There was, instead, some creepy stalkerish behavior masquerading as "romance", and it never once got called out.

All told, this was a fun bit of fluff, but could have been so much more. The hinky romance leads me towards 2 stars, but the great portrayals of friendship and geekdom bumped me up a notch.

You have subscribed to alerts for M. Pax.