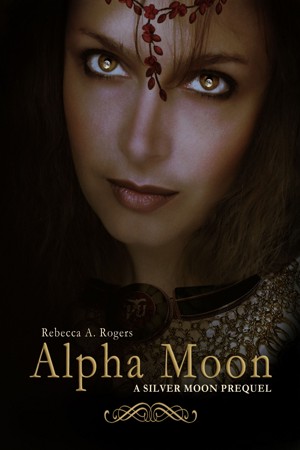 By Rebecca A. Rogers
Rated 3.50/5 based on 2 reviews
Find out where Candra and Ben's ancestors came from, and how the werewolf curse came to pass, in this prequel to SILVER MOON. More
First love.

Daciana’s parents uproot her from London to begin a new life in Colchester. Here, she won’t be whisked off to decorative parties and elegant balls; she’ll have to put forth effort into back-breaking labor. But her thoughts of eloping from the quaint town subside when she meets Ulric. Together, it’s as if they’re exactly where they should be.

During a late-night hunt for a wolf, Ulric and Daciana are attacked. Before their bodies can fully succumb to the wild animal inside, the town witch claims she holds the cure. Instead of healing their wounds, she places a curse on Ulric and Daciana, so they must live with who they truly are. In a town where secrets can’t be kept and betrayal runs thick, Ulric and Daciana are hunted for the monsters they’ve become, even by those they love.
Download: epub mobi (Kindle) pdf more Online Reader
rtf lrf pdb txt
Price: Free! USD
Add to Library
Create Widget
Tags: romance paranormal romance fantasy paranormal magic young adult historical werewolves
About Rebecca A. Rogers

Rebecca Rogers expressed her creative side at an early age and hasn't stopped since. She won't hesitate to tell you that she lives inside her imagination, and it's better than reality.

Learn more about Rebecca A. Rogers

Reviews of Alpha Moon (Silver Moon, #0.5) by Rebecca A. Rogers

I loved seeing how events led to the present in the silver moon series. Its not how I expected it but it all fit together and now I can't wait to read the first and second books again now I know how everything started. I felt so sorry for Daciana at the end. Alaric isn't all who I expected him to be and now I can't wait for book 3 to find out more about the horrible witch who cursed them.

A short light read but definitely worth it!!!

It surprises me how the author knows Old English so well. It's not something I’m fond of though. I find it confusing to read words like 'thou' and 'thee'. It's why I don't have the patience to read a classic novel. I did manage to read this book though, so maybe I can give older books a chance. It surprises me that two people mistake a wolf for a human. There's a rather big difference in the shape of a human and the shape of a canine, even a large one. Unless it's a perfect situation like in the book, I don't see how I could mistake the two.

Since 'Alpha Moon' was a prequel, I wasn’t too surprise by how fast the author wrote this. It was to give a brief history of how werewolves first came to be. It’s not entirely unique in the way they are created, since I’ve read other books where a witches was behind the werewolf. Even in history, werewolves and witches were closely associated with each other. 'Alpha Moon' book is well written, but I feel should be read after 'Silver Moon'. The official order is 'Alpha Moon' (o.5), 'Silver Moon' (1), 'Black Moon' (2), and 'Blood Moon' (3).


In 'Alpha Moon', we meet two brothers, Alaric and Ulric. We see their farming way of life, in 1569, Colchester, England. (For historical context, Queen Elizabeth I was ruling England at this time, and had been Queen for 11 years of her 70 year reign. Colchester itself is known as the oldest city in England, and was once the Roman Britain capital city. It's located 82.4 km, or 51.2 miles, northwest of London.) We later meet Daciana, who had to move to Colchester. She leaves her home because her father brought shame on their family by spending all their money on gambling so they moved to Colchester to get away from the rumors Once in Colchester, she meets Ulric.


Daciana is very full of herself. She had once been wealthy, and still views herself as such, despite now being a farmer. I suppose if something similar happened to me, I'd have a hard time accepting it too. I find her more of a brat that anything else. She is very childish in the beginning, so it surprises me by how brave she does become. She also has a rude personality, and talks down to others, something I despise. When she first meets Ulric she says, "Tis a dried up city with peasants who can hardly pay their taxes and feed their families”. I find this ironic, since Colchester was known for it's cloth, wool and oysters during the Tutor period, and was considered to be a wealthy town. Either the writer didn't do her research (unlikely, considering she does use Old English), or Daciana is unable to see what's around her and only sees value of courtly wealth. After being attacked by a wolf, she feels drawn towards Ulric, who's also faced the same wolf. They stay together, through her stubbornness, although I don't know how he puts up with her.


Alaric and Ulric are brothers, but very different personalities. Having sisters, I can agree that this is very much the case with siblings. Alaric doesn’t like to do work and is almost always at the bar drinking. Ulric is the more humble of the two, and he does the work around the house, and takes care of their father. Only sometimes does he go out to the bar. When he does go, the brothers both enjoy ale. Considering ale was often the safer option over drinking water, I don't blame them. I’m a bit lost on the concept of Alaric also being cursed too. I know he wasn’t bitten like Ulric and Daciana was. It could be when Lavenia (the town witch?) was yelling out curses at him, Ulric and Daciana. In old lore, a werewolf was created when a witch cursed someone, often forcing them to be her familiar and pet. I wasn’t prepared to find that Alaric is the almost bad guy of this story. I say almost bad guy since he's not that bad of a guy, but he wants to do the right thing, and that involves putting our love birds (love puppies?) in danger. I feel sorry for him and I can’t wait to read what had happen to him in the first book of this series.

Lavenia is a ex of Alaric, and she appeared in the book very suddenly. At least the author explained of her past with Alaric. I find her a bit crazy for holding a long grudge over something that wasn't really explained. I know that Alaric had broken up with her, but over how or why wasn't explained. I don't feel any sympathy what happened to her, because I just felt she was crazy.


It left off with a twist and a feeling of confusion over what I just read. I can’t place my finger on it, but it’s probably because I started with reading the prequel before I read the first book of this series. Hopefully it will turn into a case that it doesn't matter if you read the prequel first or not for the rest of the books to make sense.

You have subscribed to Smashwords Alerts new release notifications for Rebecca A. Rogers.

You have been added to Rebecca A. Rogers's favorite list.

You can also sign-up to receive email notifications whenever Rebecca A. Rogers releases a new book.