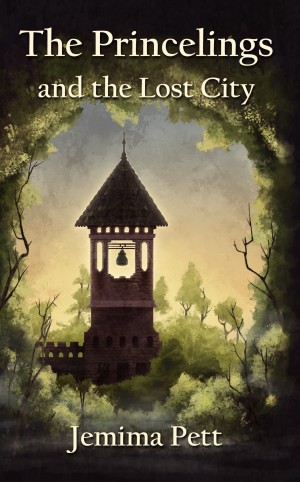 The Princelings and the Lost City

By Jemima Pett
Rated 4.67/5 based on 3 reviews
The Princelings and the Lost City is the final part of the Princelings trilogy. Fred, now Crown Prince, decides to introduce Princess Kira to their home castle. A simple journey ends in kidnap, mistaken identity, heartache, and the discovery of a totalitarian society hidden in the forest. Our guinea pig heroes, Princelings Fred and George, at their very best! More
The Princelings of the East is a trilogy relating the adventures of unlikely heroes Fred and George. Two innocents abroad, they solve problems caused by unintended consequences, commercial greed, and blind prejudice — and still find time to engage in troubled love affairs and nearly blow themselves up with their own inventions.

In the third book, The Princelings and the Lost City, Fred has made a commitment to his true love, Kira, but must win her father’s approval. George, meanwhile, is near to fulfilling his destiny, but gets sidetracked by the arrival of a new flying machine. A simple journey to introduce Kira to their home castle turns into a case of kidnap, mistaken identity, heartache, and the discovery of a totalitarian society hidden in the forest.

The Princelings series is a fantasy adventure for good readers age 10 and upwards, that combines the charm of The Wind in the Willows with a world reminiscent of Anne McCaffrey's Pern. It will be enjoyed by animal lovers as well as those who enjoy an imagined world where power struggles, self-interest and prejudice can be overcome by hard work, friendship and a little bit of talent.

The Princelings and the Lost City is available as a paperback as part of the Princelings of the East Trilogy - see the link for details.

THE BUZZ
"The Lost City, Book Three of The Princelings trilogy is a great read for those who love fantasy with young male protagonists. The plot is new, interesting, and will engage your mind in the story. A great work was created by the author with this trilogy. I enjoyed the well-developed characters and their many adventures.

In all, this is a very nice piece of writing. The trilogy has been completed without leaving any loose ends. I would have to say that this has been an overall enchanting trip into a fantasy realm." - Readers Favorite
Available ebook formats: epub mobi pdf rtf lrf pdb txt html
First 15% Sample: epub mobi (Kindle) lrf more Online Reader
pdb
Price: $3.99 USD
Buy Add to Library Give as a Gift
How gifting works
Create Widget
Tags: adventure castles biplane sex discrimination guinea pig female hero middle grade 6
About Jemima Pett

Jemima reads from Lost City
I was tempted to read you my favourite chapter (in all my books) but it's too long and involves too many characters. I've given you a key moment in the early part of the book instead, and also I talk about speech difficulties in general, as George is having trouble in this story.

Reviews of The Princelings and the Lost City by Jemima Pett

Fred, George (who is trying to regain his speech) and Kira take an unexpected detour in the tunnels, and discover a ‘lost’ city, which turns out to be not an uninhabited ruin.

This is an excellent addition to the series, which contains both a fun and interesting plot, and an entertaining and lovable cast of characters.

We pick up our story with George recovering from his injuries, Fred trying to win Kira's hand in marriage, and Prince Lupin getting married to Princess Nerys, Kira's sister. The power plant project is progressing smoothly and Fred is hard at work thinking of ways to improve Castle Marsh, ways that would make full use of the flying machine Miles and George were working on.

When Fred, George and Kira stumble upon an apparently deserted castle called Arbor on their way to Castle Marsh, they decide to explore it, resulting in Kira being kidnapped and an imposter put in her place.

I found this book more interesting than The Princelings and the Pirates, not least because it starts to explore sexism and male privilege in a very natural and practical way, which I think is excellent. Pett doesn't just look at it in a one-sided manner, but looks at the excesses of both feminism as well as male chauvinism. Granted, things in Arbor are over exaggerated - I'm not sure if this should be for kids aged 10; whilst Pett is delicate and doesn't state things very explicitly, I don't recall if these are things that a 10-year old would understand? Then again, kids mature so fast now that they might probably think Pett is being prudish. Hm.

Pett is in top form with several heart-tugging scenes scattered throughout the story and an exciting race against time.