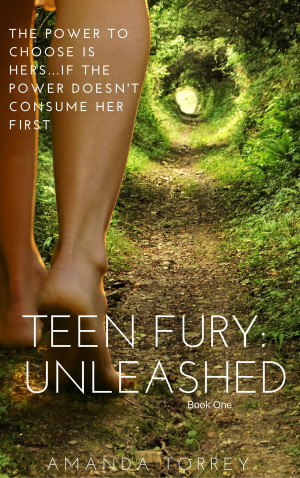 By Amanda Torrey
Rated 4.33/5 based on 3 reviews
Snakes emerging from her head, a strong thirst for vengeance and massive mood swings threaten 15 year old Felicia's goal—to win the grant for the troubled kids she mentors. When this normally stable girl learns she’s the offspring of a Fury and a god of Mercy,she knows she has choices to make and temptations to resist in the form of two new guys, each wanting to lead her down a different path. More
Adopted at birth, fifteen year old Felicia Murphy has no idea she’s the offspring of a Fury and a god of Mercy. The discovery will soon shatter her world...
Felicia’s reputation as stable and trustworthy means everything if she’s to win the grant for the troubled kids she mentors.
Snakes emerging from her head, massive mood swings, and a strong thirst for vengeance do not fit into her plans. She has no time to worry about her adoptive parent’s separation and the unwanted discovery that her biological parents are supernatural freaks. She can’t confide in her friends; who would believe her?
As her life spins out of control, she allows herself to be distracted by the two new guys who are suddenly showering her with attention, pulling her in different directions.
Felicia has choices to make. Embrace the Fury and risk everything, or find a way to tame the beast.
Download: epub mobi (Kindle) pdf more Online Reader
rtf lrf pdb txt
Price: Free! USD
Add to Library
Create Widget
Tags: romance friendship forgiveness young adult mercy teen high school identity mythology adoption love triangle mistakes fury community service
About Amanda Torrey

When not writing, Amanda enjoys hanging with her kids, reading, playing in nature, obsessively checking Facebook, visiting Disney World (as often as possible), ROAD TRIPS, and going to the movies. She loves meeting new people, and especially loves to hear from readers!

Teen Fury: Unleashed by Amanda Torrey is a YA paranormal story that focuses on a young girl who was adopted at birth and knows nothing about her birth parents. Suddenly, at the age of 15, she discovers that her birth mother is a Fury and her birth father is a God of Mercy. This discovery is earth-shattering to young Felicia and causes a lot of complications in her life. It also brings her into contact with two mysterious guys, Zane and Ryder, who are pulling her in two very different directions.
This book was a refreshing break from vampires and werewolves and Ms. Torrey managed to put a unique spin on her YA paranormal novel. The whole idea of this teenager discovering that she is the real daughter of two mythological creatures was interesting. I loved the character of Felicia. She was a perfect teenage heroine. She was caring & genuine and she had goals - like getting a grant to help the troubled teens that she mentors...but she also dealt with real teen emotions - like her anger at being laughed at and her confusion over what boy to like. The love triangle between Felicia, Zane, and Ryder provided a lot of tension and also helped Felicia (and the reader) to understand the dichotomy that she was struggling with because of the fury side and the mercy side of her genetic make-up. But I have to admit that I was on team Ryder from the moment he came into the story!
This story had a great mix of mythology, powers, adventure, and romance. I really enjoyed it and I will be reading book 2 of the series when it is released *Note - I'm assuming there will be a book 2 because there were a few things that were left unanswered for me at the end and I'd love to see how Felicia continues to handles her powers and the choices that she made while also handling high school.

This book is about a 15 year old girl named Felicia who is adopted at birth, no one ever could identify their birth parents, it’s like she was materialized out of thin air, but what her adopted parents didn’t know when they found her was that she wasn’t only a baby, she was the daughter of two mythological creatures/gods, The Fury and The Mercy..... Luckily her life was pretty normal until she got her period for the first time and things started to change abruptly, she started to change and that’s when the game begins...
I found myself pretty absorbed in the book, it’s very well written and the idea is pretty original, it’s not a paranormal book about mainstream creatures such as vampires, faeries, werewolfs, angels or demons, and I found that quite interesting. It’s a page turner, and very easy to read and follow. I loved all the characters, and it was hard for me trying to decide which one I liked more, Zane, Ryder or Cory, despite being a huge fan of bad boys myself, in this one I have to choose Ryder! He has all that mysterious aura around him and it’s like a mixture between bad boy and good boy and I’m looking forward to read more about him and Felicia in the future.
It was a great book and the only thing that made me rated it in 4 stars instead of 5 was the end, being a series it must have (IMO) a cliffhanger, something that would make me want to read the next one as soon as possible, and that wasn’t what happened, the end is good and happy but I felt like it would be a perfect book if the end had something that would make the readers to count the days off until the next one.
I was given this book by the author in exchange of an honest review.

A great read, I could not put it down ! I can't wait for the next book , I love the cover too. The writer really captured my attention !!

You have subscribed to alerts for Amanda Torrey.

You have been added to Amanda Torrey's favorite list.

You can also sign-up to receive email notifications whenever Amanda Torrey releases a new book.